Home > Other > Alabama can win a national title with either quarterback 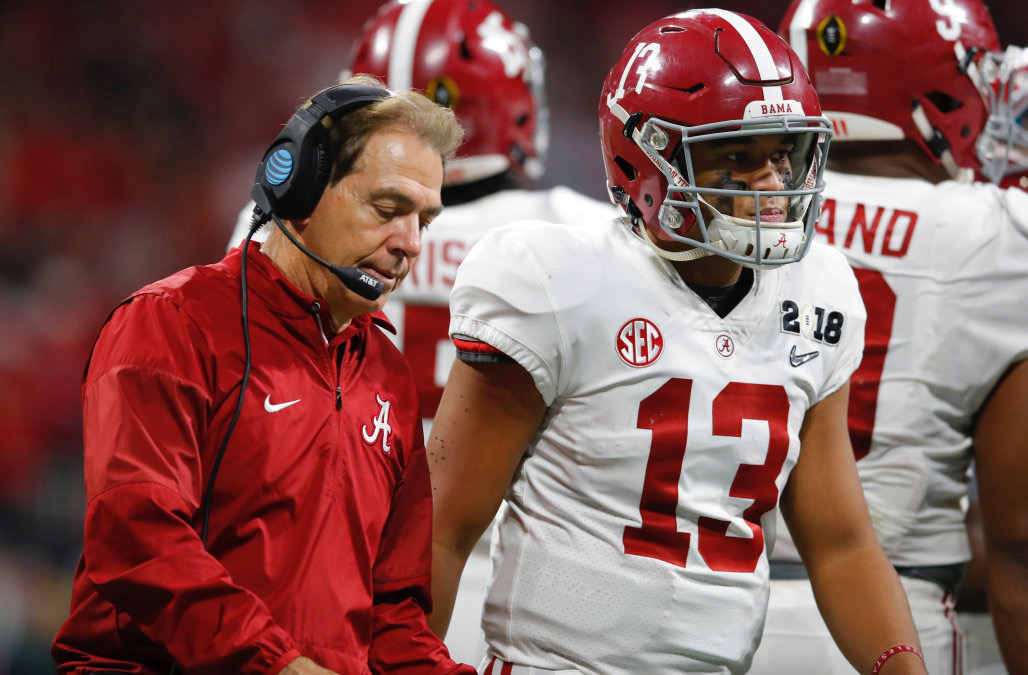 ATLANTA — Mustard or Ketchup? Paper or Plastic? Coke or Pepsi?

But, more importantly, Jalen or Tua?

On January 8th, just a quarter mile down the street here from SEC Media Days, Alabama head coach Nick Saban made one of the biggest decisions of his career. With the Crimson Tide trailing Georgia 13-0 at the half inside Mercedes-Benz Stadium, the six-time national championship winning head coach pulled Jalen Hurts, a quarterback with an overall record of 26-2 through two seasons, to put in a true freshman from Ewa Beach, Hawaii. From that point forward, forty-one yards later, the legend of Tua Tagovailoa was born.

On Wednesday afternoon inside the College Football Hall of Fame, Nick Saban blamed the media for creating a “controversy” surrounding his quarterbacks, which feels a little ironic given he pulled Jalen Hurts in front of 28.4 million people on the sport’s biggest possible stage to spark this discussion.

“I think the number one thing that you will want to talk about is the quarterback controversy that you’d love to create, that you’ve already created, that you will continue to create, and I will tell you the same thing exists there. It’s still to be determined as to who is going to play quarterback for Alabama. So you can ask all of the questions about it, but it’s still to be determined,” said Saban with a smirk.

After hustling over from the College Football Hall of Fame to the electronic media room on the second floor of the Omni Hotel, the answers didn’t just magically change from Saban. “[The starting quarterback] is yet to be determined,” he said. It’s going to be determined in fall camp by who wins the team. There’s not really a whole lot else to say about it. I can say we’d much rather have two guys than none. That’s the answer to that question.”

In fact, the topic of conversation quickly shifted from the quarterback competition to the team’s viral boating incident while at Saban’s lake house in June. “Let me get the record straight here. The fuel pump went out. We did not run out of gas,” said Saban on his team-bonding afternoon turned wrong.

With all of the buzz surrounding who will be Alabama’s starting quarterback, the Tide’s schedule is one of the most favorable of Saban’s eleven years in Tuscaloosa. Drawing Tennessee and Missouri from the East, and starting the season with a Louisville team without Lamar Jackson, Saban’s quest for his seventh title seems more and more likely.

Jalen Hurts is set to graduate in December, if he chooses to stay, and Saban has made it clear he will “create a role for one or both [Jalen and Tua] on our team.” If Hurts does choose to leave, he will most likely leave as a grad-transfer and have two full years of eligibility to play where he chooses. In that case, you’d have to think Hurts would be one of the biggest transfer quarterbacks ever.

If I had to guess, Saban will probably play both Jalen and Tua for the opener against Louisville, and quite possibly into the middle of the season until one clearly proves themself as the clear-cut starter. When it’s all said and done, Tagovailoa probably gives Alabama the best chance to win more games, with his arm, with his legs and everything he brings to the table.

“You always want to have every player who can contribute to their team and have the opportunity to contribute. These guys have different skill sets, so there may be the possibility, if the team buys in (to playing both guys). Somebody has got to win the team over,” said Saban

In the words of Saint Nick, in regards to his quarterback situation: “We’ll see.” Indeed we shall, and it should be an entertaining first month of the college football season in T-Town.