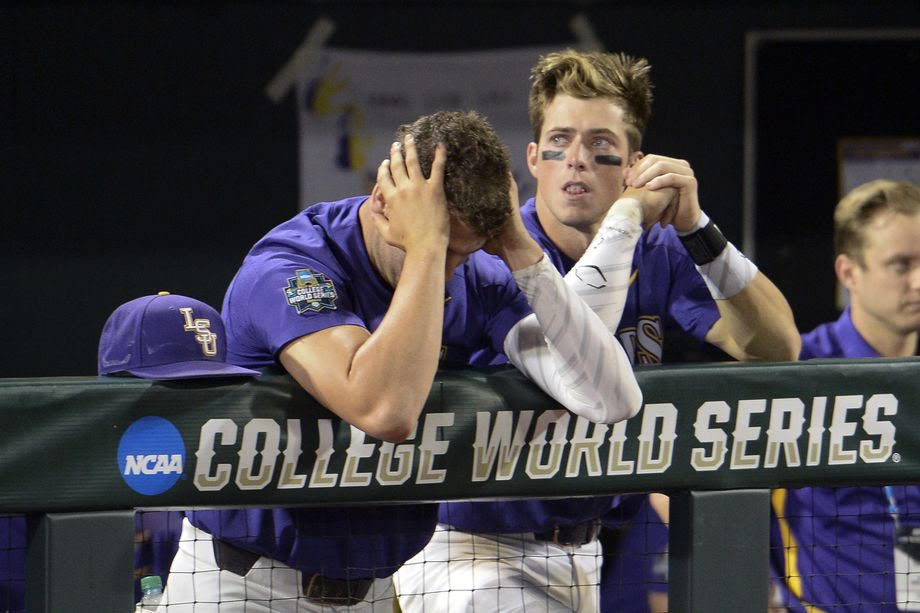 LSU’s final series with Florida has been categorized by not capitalizing with runners on base, and tonight was the prime example. The Tigers had first and third with no one out in both the seventh and eighth innings, coming out with nothing to show for in each trip.

As agonizing as this loss was, it doesn’t take away how remarkable this season has been for the Tigers. Paul Mainieri’s squad finished 52-20 on the year, having won five individual championships, also accepting the runner up in the 2017 College World Series.

LSU starting pitcher Jared Poche got off to a shaky start, however, his outing was headlined by his ability to get out of jams. The Gators were able to blow the game open in the eighth, posting four runs to essentially seal it for their first ever National Title.

Game two, much like game one, was filled with controversy. In the seventh inning, LSU had runners on first and third with no outs, as Greg Deichmann grounded into a double play to score Josh Smith. Shortly after Smith crossed home plate, the umpire signaled that Jake Slaughter made an illegal slide into second, thus forcing Smith to return to third and not score the run for LSU. This was a monumental part in the game, and cost the Tigers the tying run.

For the Tigers, Kramer Robertson, Cole Freeman, Greg Deichmann and Jared Poche all came back to Baton Rouge with the goal of making it back to Omaha. The four seniors truly epitomize everything LSU Baseball has stood for during their time at Alex Box Stadium and have left their mark on the program forever.

“I am at peace with my career. I gave everything I had to this university,” said Robertson who was getting emotional. Paul Mainieri also held back tears after the game, talking about how close knit his ball club has become.

That’s a wrap on the 2016-2017 LSU Baseball season. Thank you to all who have followed us along the way.