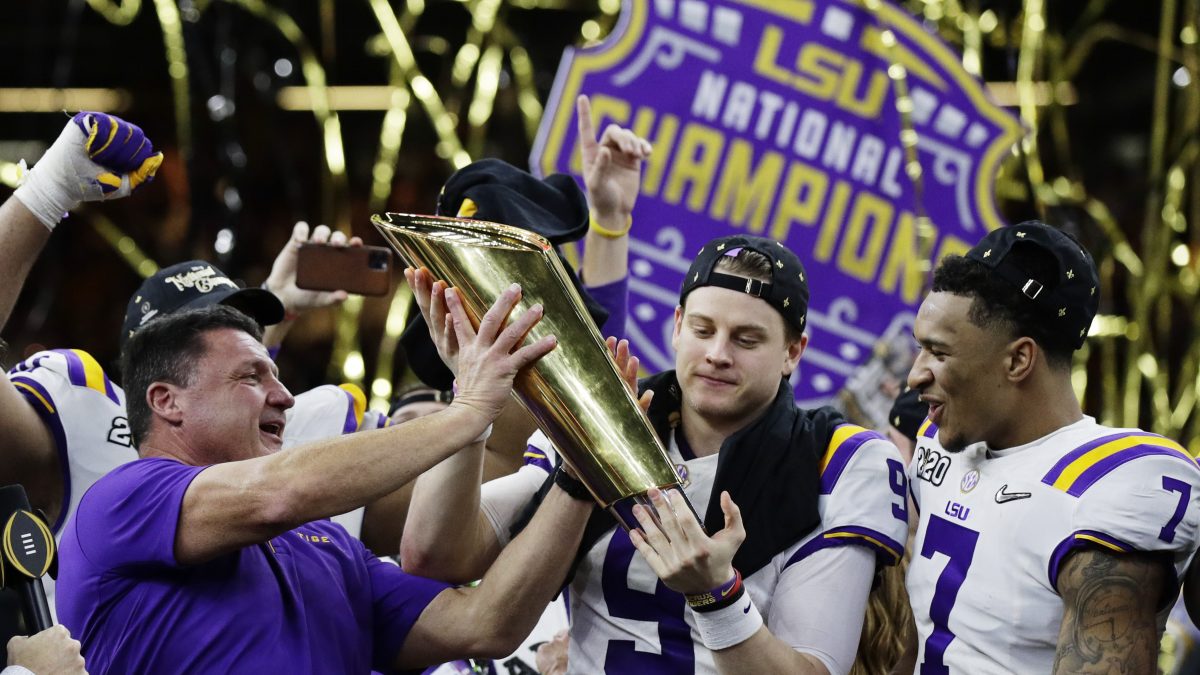 After LSU defeated Clemson to capture the program’s fourth-ever National Championship, quarterback Joe Burrow sat back, smoked a cigar and took it all in. The dream finally became a reality, and the 2019 Tigers cemented themselves as the best team in college football. Ever.

Finishing with a perfect 15-0 record, LSU became the first team in history to beat each of the top four teams in the preseason AP poll, while also recording an NCAA record seven top-10 wins throughout the season. That is unprecedented. And that’s why they now stand in a league of their own.

“This team is going to be mentioned as one of the greatest teams in college football history,” head coach Ed Orgeron said postgame. “That’s for you guys to decide. We’re national champs.”

Rewriting the history books doesn’t just happen by itself, though.

Starting with Orgeron, LSU was fueled by doubt all along. No Hollywood writer could script a season so perfect. And to finish this magical run in New Orleans in front of a de facto home-field advantage was an ending so beautiful you’d think it was a dream.

If you’re reading this Tuesday morning after a long night on Bourbon Street — it wasn’t. That really just happened.

The journey all starts with Coach O, the LSU-loving Cajun from Larose (La.) who’s been questioned his entire career, mocked for his accent, and scoffed at for thinking he could succeed like he did last night.

Well — according to the shiny new ring on his finger — the joke is seemingly now on them.

Orgeron becomes one of just six active coaches who have won a National Championship, and he’s only in Year 3. He’s kept a mental note of all his haters and used them as motivation.

“People that made fun of my accent before, I thank them,” Orgeron said on Sunday. “That gave me internal motivation to do better, so I thank them to be motivators of my career.”

Then the story shifts to the quarterback, an undervalued high school prospect who wasn’t given a chance, battled injury and transferred to fight for a starting job. With an FBS record 60 passing touchdowns (65 total), the second-highest completion percentage ever, a Heisman Trophy and a National Title, Burrow secured the greatest single-season by any quarterback ever. The statue outside of Tiger Stadium is next.

You starting to see the trend? Don’t let others define you.

There’s also guys like Clyde Edwards-Helaire, who was told he was too short. Justin Jefferson was a two-star prospect. Lloyd Cushenberry and Damien Lewis were always overlooked. But, they all came together as one to form the team of destiny.

Who would have thought we would be known as…

From top to bottom, everything gelled perfectly to form that destiny. It was one big bowl of gumbo with all the perfect ingredients. The hire of Joe Brady and the relationship that Brady formed with Steve Ensminger was game-changing for the offense. It was centered around selflessness, and it was a match made in heaven.

Monday night was no different.

Clemson defensive coordinator Brent Venables is pinned as one of the best in the game, but the Brady-Ensminger duo did what they do: drop 628 total yards of offense, five touchdowns and 42 points. It doesn’t matter who you are. They don’t discriminate. They take no prisoners. It’s a well-oiled machine that nobody was able to stop.

“They had a great plan coming in. [Venables] is one of the best in the country at what he does,” said Burrow postgame. “We had great play calls, a great coaching staff … I mean, this was a long time coming.”

Ever since 2012, LSU has since longed for a chance at redemption. Last night they got it, leaving the Superdome as the greatest college football team ever in the comfort of their home state.