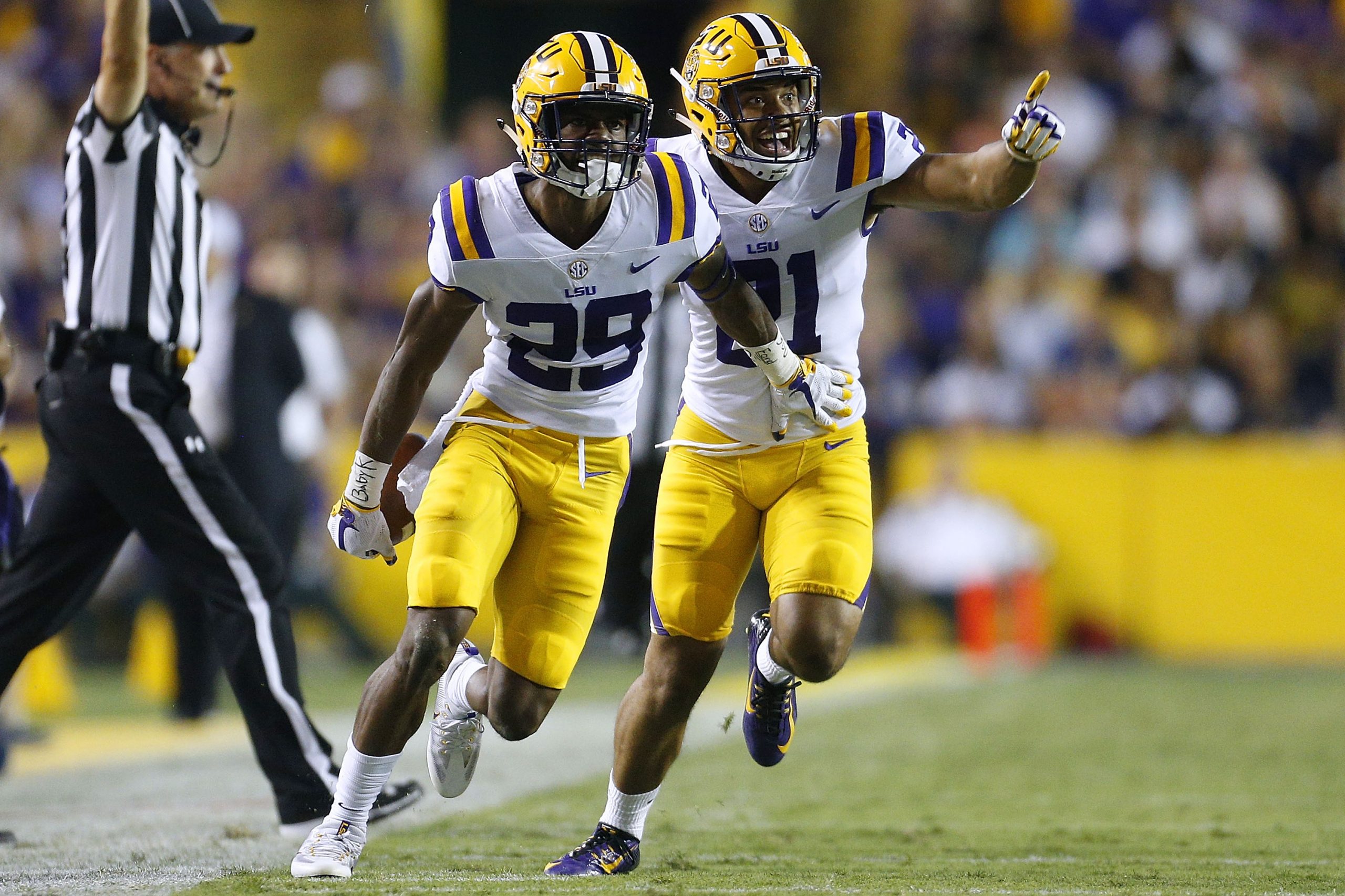 For the last decade, preseason hype surrounding the LSU football team has been somewhat unrealistic. No matter the circumstance — no matter how many players left for the NFL — no matter who was playing quarterback, the Tigers were always atop those preseason rankings and polls. And, understandably so, given the past success in Baton Rouge.

This year is different. In fact, many critics aren’t even giving Ed Orgeron and the Tigers much of a chance. Although six underclassman left early for the pros, it’s not the talent that’s lacking. LSU is getting an upgrade at their infamous position of weakness with the acquisition of Ohio State grad-transfer QB Joe Burrow, also with young talents Myles Brennan and Lowell Narcisse. The defense returns two of the top overall players in college football with Greedy Williams and Devin White. The talent is there.

What many people are skeptical about is that oh so brutal schedule they have assembled. Beginning with Miami in Dallas (Tx.), Auburn and Ole Miss in September, the Tigers must also face Florida, SEC Champion Georgia, Mississippi State, Alabama and others in 2018.

With a lot of departures, some key returners, and 23 incoming signees, we’re here to break it all down and give you a taste into what you’re getting with the 2018-2019 LSU Football roster.

Joe Burrow – You don’t transfer to LSU over Cincinnati unless you know you’re getting the starting job. The expected favorite in the competition, Burrow brings two years of learning experience under one of the greatest quarterback coaches of all-time in Urban Meyer. He’s not going to be the next John Elway, but he’s an upgrade and brings experience the other quarterbacks lack.

Myles Brennan – We got a quick glimpse into Myles Brennan last year. Entering in some meaningful moments, while also seeing some garbage time snaps, Brennan was obviously too undersized to play week in and week out in the Southeastern Conference. With offseason weight gain, expect Brennan to play a lot this year, and quite possibly win the starting job.

Lowell Narcisse – Unlike Brennan, we did not get a glimpse into Narcisse due to redshirt. He brings a dual-threat style of play with considerable size and speed. Because of his style of play, his lefty release and noticeable size, many believe Narcisse is the guy for the future of this position.

Clyde Edwards-Helaire – LSU’s running back situation is unclear. Edwards-Helaire is a sophomore from Baton Rouge who saw the field during his freshman year. Behind Guice and Williams, he was the third stringer and also was the lead returner on kickoffs. At 5’8, 208 pounds, expect him to be LSU’s main back this season, which is why so many are concerned with this position.

Nick Brossette – Brossette is a senior who’s been caught in the shadow of Fournette, Guice and others. He is expected to split carries with Edwards-Helaire, but we haven’t heard much from anybody about the progressions the running backs have made in the offseason. To say the least, it’s a position of uncertainty, something that no one is used to in Baton Rouge.

Jonathan Giles – An enormous pick up for Ed Orgeron. Losing DJ Chark and Russell Gage was significant for this offense, but in comes one of the best wideouts in the country, a transfer from Texas Tech with two years of eligibility remaining. While in Lubbock, Giles notched 1,158 receiving yards and 13 touchdowns on 69 catches. After sitting out in 2017, Giles is ready to break out in Death Valley, and expect him to be targeted a ton this season.

Terrace Marshall – Talk about enormous pickups, Marshall, the 5-star prospect from Bossier City (La.) and Parkway High School enters as the No. 1 wideout in the 2018 class and adds to the stellar depth this position has. Marshall will be one of those players, like Malachi Dupre, who will make an immediate impact out of high school.

Ja’Marr Chase – The No. 2 WR recruit in the State of Louisiana and another one of those immediate impact players. Chase, from Metairie (La.) and Rummel High School, is just a bit smaller than Marshall but expect him to catch a few touchdowns in his freshman season.

Stephen Sullivan – One of LSU’s most experienced wideouts. Tremendous size standing at 6-foot-6, Sullivan will need to make an impact as a leader of this unit. From top-to-bottom, this is the most depth at wide receiver LSU’s had since the Beckham Jr. and Landry days.

Foster Moreau – One of the most improved and talented tight ends in recent memory and will be a key target in the receiving core. The Tigers haven’t had a storied past with tight ends, however, Moreau will play a monumental role in this year’s offense. As a rising senior he brings experience, intelligence and play making abilities to the table in 2018. Expect him to play significant minutes.

Saahdiq Charles – Enters 2018 as a sophomore, but he played his freshman season like he’s a veteran. Saahdiq Charles is part of the reason why many think LSU’s offensive line will be very strong this year. Charles started in all 13 games for the Tigers last season and his role is just going to get bigger. So many of the Tigers’ young offensive linemen gained quality experience last year, and it’s going to pay off as they become older.

Badara Traore – Traore enters as a freshman, but an expected starter right away. He was rated the No. 1 offensive line prospect and the No. 6 overall JUCO player, per 247Sports. Coach Orgeron’s priority in 2018 was to load up in the trenches and Traore was a major piece to this class.

Ed Ingram – Another freshman last season who stepped up big time and started in all 13 games. The 6-foot-4, 314 pounder from DeSoto (Tx.) will be a key role player in first year offensive line coach James Cregg’s unit.

Garrett Brumfield – Entering his senior year, the Baton Rouge native Brumfield will be the glue that holds this line together. This offensive line has a lot of young talent, but Brumfield’s experience will be valuable to this group.

Greedy Williams – Ranked the No. 11 overall player in college football by Sports Illustrated. Williams is the typical lockdown corner in Coach Raymonds secondary with a swagger not many have. He recorded an FBS-leading 6 interceptions with 38 tackles in his freshman campaign, and the sky’s the limit for him in 2018. Many see “Greedy” as a top draft choice in the 2019 NFL Draft.

Grant Delpit – If there’s a player who will make the biggest jump from his freshman season to his sophomore season, it’s going to be Grant Delpit. Tremendous upside. The 6-foot-3 safety from Houston (Tx.) reminds many of former Tiger and current New York Jet Jamal Adams, and Delpit made more than an immediate impact during his freshman year starting every game.

John Battle – He’s back and better than ever. Battle returns for his fifth year of eligibility due to injury and provides the secondary with some much needed depth and experience. In 2017, Battle recorded 61 tackles and an interception. Off the field, he’s adopted quite the talent in photography as well.

Devin White – The best overall player on this football team. White tallied over ten tackles in 8 of the 13 games in 2017 with 133 total tackles. White is becoming the next star in this program. It’s hard to believe he could have a better season than last year, but he’ll be the first to tell you 2018 will be his best yet.

Tyler Taylor – Freshman last year who made the most of his playing time. Taylor started the Citrus Bowl due to the suspension of Donnie Alexander, and proved to many that he’s going to be a solid player going forward. Taylor’s 2017 was highlighted with 6 tackles vs. Syracuse and 4 tackles vs. Tennessee.

Rashard Lawrence – When Rashard Lawrence is out of the game, you can tell. His presence in the trenches is monumental, and he’s proven to be the Tigers’ best defensive tackle. Lawrence’s role will be enhanced with the departures of Arden Key, Greg Gilmore and Frank Herron, but he’s more than prepared for the task. In 2017, he recorded 38 total tackles and 2.5 sacks.

K’Lavon Chaisson – The next Arden Key, Barkevious Mingo, Danielle Hunter for the LSU pass rush. Chaisson was the highest rated prospect in LSU’s 2017 recruiting class and he made quality contributions during his freshman season with 27 total tackles and 2 sacks. With Key now gone, it’s next man up for Dennis Johnson and the defensive line, and Chaisson is that guy.

Breiden Fehoko – Another one on that Texas Tech transfer train. Fehoko, the 6-foot-3, 298 pounder from Honolulu, Hawaii is a phenomenally talented defensive lineman that will start for the Tigers in 2018. Like Giles, he practiced and sat out with the team in 2017 and has two years of eligibility left.

It’s obvious that the talent is there for this team. However, it will be a mental test to weather the difficulties this 2018-2019 schedule and season will bring.