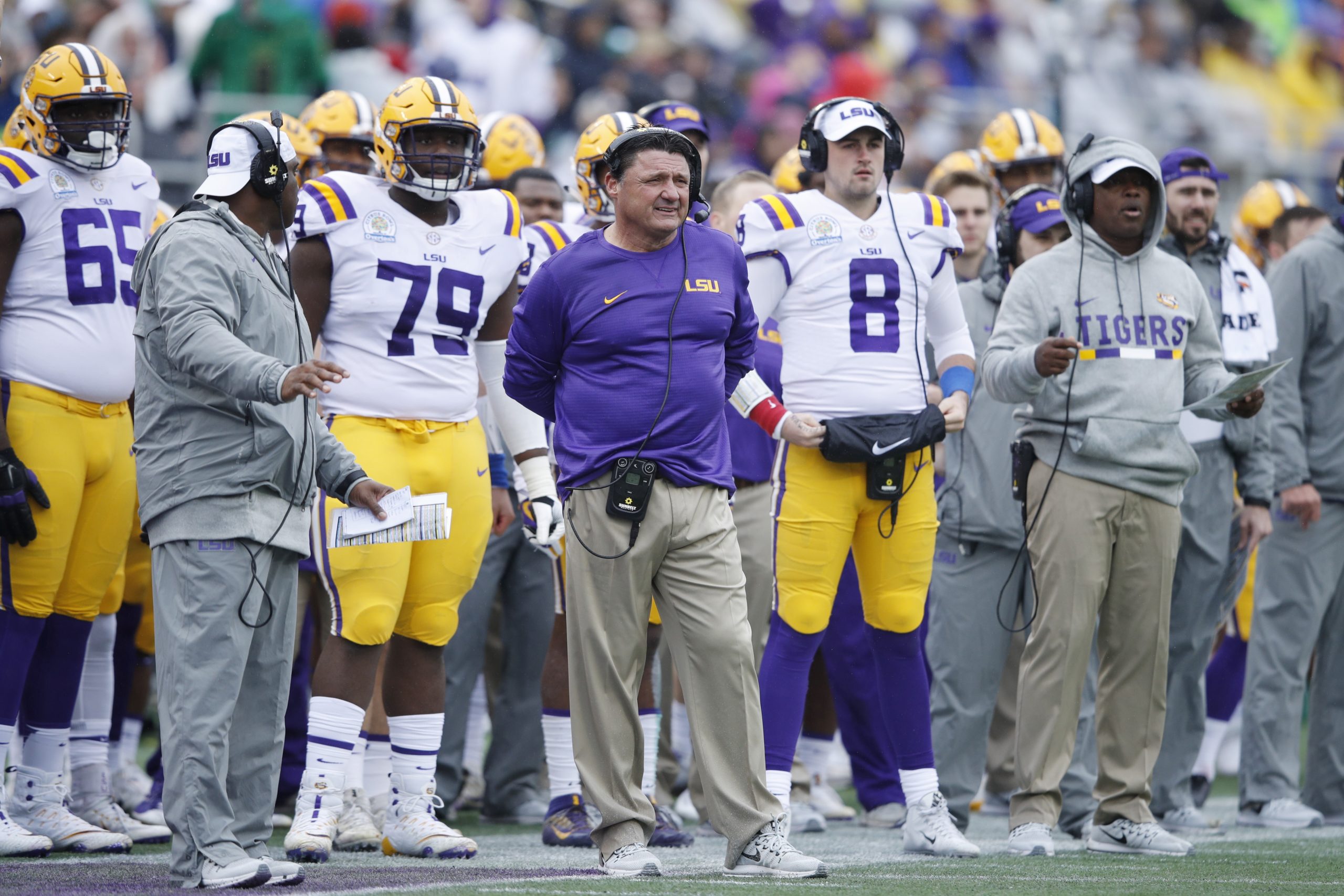 Just two weeks after the conclusion of the 2017 football season, head coach Ed Orgeron knew there was no time to waste. Shortly after landing in Baton Rouge after the Citrus Bowl loss to Notre Dame, Coach O hit the road recruiting and made some risky coaching hires that should define his time here at LSU.

However, before we dive into the coaching hires, multiple underclassmen decided this week that they would forgo their senior seasons and declare for the NFL Draft. For example, juniors Donte Jackson, Kevin Toliver, Toby Weathersby, Derrius Guice and Will Clapp all made their announcements this week. LSU’s six underclassmen turning pro is four less than the school’s highest number ever in 2012 (10). The good news is that LSU returns a young team with players to fill those absences. That is a luxury that the Tigers have been used to for some time now.

Then came the expected promotion of Steve Ensminger. On Thursday afternoon, LSU and Ed Orgeron named Ensminger as the new offensive coordinator at an introductory press conference. Ensminger is a Baton Rouge native who is beyond committed to LSU … but was it the right move?

The fans have made it clear that they think this is a lazy hire, but Orgeron demands that they give Ensminger his credit where it is due. Orgeron was loud and clear on Thursday, noting that LSU averaged 426 yards and 32 points per game and went 89% in the red zone under Ensminger when he was the interim offensive coordinator in 2016.

“He’s the best coach to lead LSU’s offense,” said Orgeron. “I believe that with all my heart.”

Then this question came to mind. If he’s the best coach for this job, and always has been, then why did we hire Matt Canada in the first place? This is a hire that will potentially make or break Ed Orgeron’s legacy in Baton Rouge. LSU returns two young and highly touted quarterbacks in Myles Brennan and Lowell Narcisse, and they last thing they need is instability in the offense and in that QB room.

“We must and we will develop championship quarterbacks to be a championship caliber team,” said Orgeron on Thursday.

This time last year it was Matt Canada taking the podium, making promises about his offense, how it would win over the fans, and how he was here to stay for a “very, very long time.” Even Orgeron confidently said at his very own introductory press conference that he would assemble the best coordinators in all of football. Only time will tell if Steve Ensminger is the right guy for this position; however, time is running out on these promises and it will show on the field.

And to top it off, LSU finally announced that Jerry Sullivan would be named as a senior offensive assistant and passing game coordinator. Sullivan joins LSU’s staff holding 25 years worth of NFL coaching experience. Orgeron praised Sullivan for being “widely known in the NFL and college football as one of the great teachers of the passing game.” Sullivan also worked at LSU from 1984-1990.

With National Signing Day just a few weeks away, LSU is looking to round out their 2018 class in style. Orgeron has 3 slots remaining to fill after the commitment of DB Kelvin Joseph at the Army Bowl. LSU’s staff will now focus on signing Ja’Marr Chase and Patrick Surtain Jr., in what has been an already busy and hectic offseason. LSU encouraging fans to execute a Stripe Out