Home > Football > For Ja’Marr Chase, the No. 7 represents a new challenge that excites him 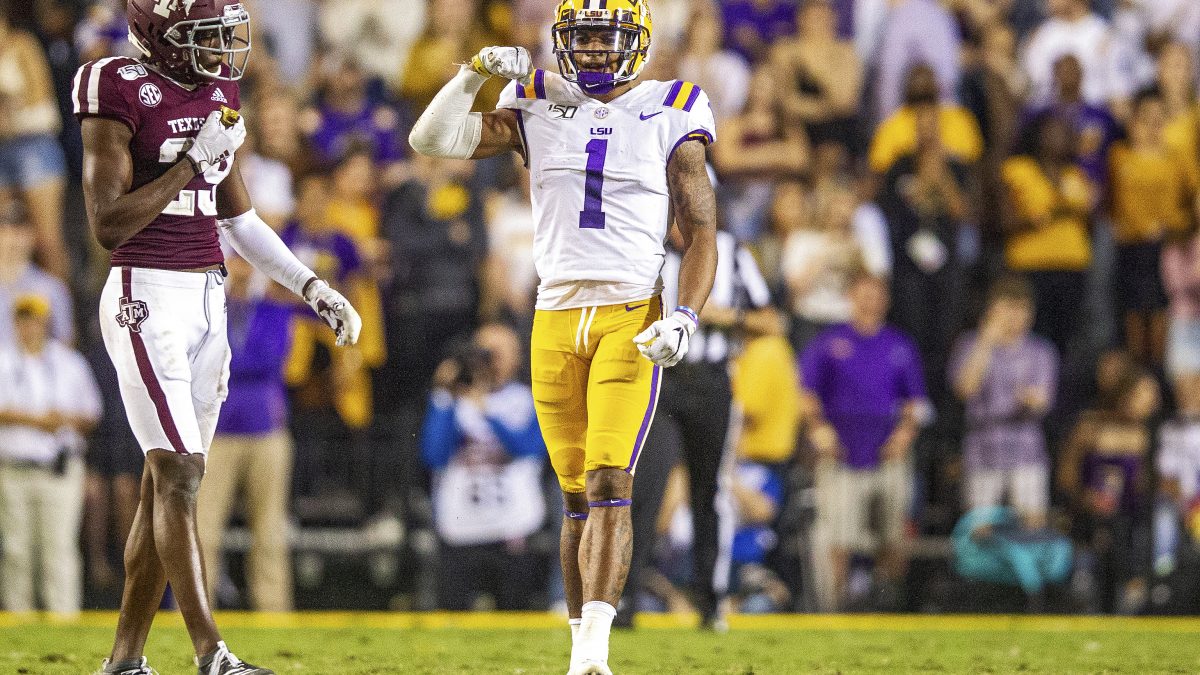 Ja’Marr Chase was fully aware of the expectations that come with wearing No. 7 at LSU, but he welcomed that burden. In fact, the challenge was something that excited him.

The number — a coveted honor given annually to a team playmaker — was not something Chase sat back and waited for. He wanted the No. 7, and tracked down head coach Ed Orgeron to let him know just that.

“I asked him,” Chase told LSU Athletics in an exclusive interview. “I said Coach, I want 7.”

Coach O’s response? It was succinct: “Alright, let’s do it.”

It was a tough decision, Chase says, and something he pondered about for a couple of weeks. But ultimately he viewed the No. 7 as a competitive number. He wanted that challenge upon himself.

A unanimous All-American, Chase separated himself from the rest in 2019, winning the Biletnikoff Award for the nation’s top receiver, finishing with 84 receptions for an SEC-record 1,780 yards and 20 touchdowns.

NFL analyst and former scout Daniel Jeremiah recently described Chase’s competitiveness as “off-the-charts impressive,” noting he never gives himself up and rarely runs out of bounds with the ball in his hands.

His mentality to always fight for the extra yard has always been a part of his football identity.

“I’m a physical receiver,” Chase explained to the media the Monday before the Arkansas game. “I like to put my head down and fight for the extra yard. That’s the type of receiver I am.”

At the beginning of the season, Chase set out a list of goals and posted them on his mirror. He wanted a constant reminder so his focus never wavered. The list — which stared him in the eye each morning — called for 50 catches, 1,000 receiving yards, the Biletnikoff Award, LSU’s all-time touchdown record, and, most importantly, to win the SEC Championship.

He achieved all of them.

But even with a record-setting 2019, a year where he met and exceeded many of his personal goals, Chase is ready to set new ones, this time wearing a new number.

“A lot goes through my head as I hear [the No. 7],” Chase said. “I think about all the people who wore it first. But the first thing that pops up [in my head] is which receivers wore it.”

D.J. Chark, former team captain and current member of the Jacksonville Jaguars, was the last notable receiver to don the prestigious number.

Competition fuels Chase. He’s the best receiver in America. Derek Stingley Jr — his matchup in practice — is the best corner in America. So for the two of them, iron sharpens iron, and their battles behind closed doors became must-watch theater for LSU coaches all year long.

“It’s a fun matchup, you’ve got NFL guys going up against each other,” said cornerback Kristian Fulton in October on the Chase-Stingley matchup. “The plays you see them making on Saturdays — that’s what they’re doing every day in practice.”

If you watched the NFL Draft in April, you might have noticed Clemson corner A.J. Terrell and Alabama corner Trevon Diggs get selected in the early rounds. Why even bring them up? They both have something in common: Ja’Marr Chase took their lunch money on the football field.

Best WR that you have faced?

While it’s true Chase would’ve been a prohibitive top-5 pick in this year’s draft (if he was eligible), the better the competition, the more dominant he seemed to be.

The rising junior from Harvey, Louisiana recorded 10 more deep catches (24) than any returning receiver in college football. One-on-one, he’s a matchup nightmare. And when Joe Burrow threw it up to Chase, the outcome almost always felt automatic. Six.

On the heels of an unprecedented title run, Chase stayed behind while many said goodbye. Every draft eligible player on LSU’s historic 2019 offense was either selected in the NFL draft or signed as a free agent. Joe Brady, the Broyles Award winner, joined the Carolina Panthers to become their next offensive coordinator. Jorge Munoz followed Dave Aranda to Baylor.

It’s been quite the offseason, but in Baton Rouge, the show goes on. It has to.

With junior receiver Terrace Marshall coming back, alongside guys like Racey McMath and five-star tight end Arik Gilbert, Chase doesn’t envision much of a drop-off for the 2020 season.

“We’re going to take every game, one step at a time,” Chase said. “We’re going to have Myles [Brennan] working hard. The receivers are still going to work hard. Everyone is going to come back and prove themselves again. And, I know we still have Coach [Ensminger].”

While Brady may be gone, his playbook remains. And many forget it was Steve Ensminger who was actually the offensive coordinator and the primary maestro to LSU’s well-oiled machine. But now enters Scott Linehan, a longtime NFL offensive mind, to replace Brady as the Tigers’ passing game coordinator.

Chase, before spring practice was halted due to COVID-19, revealed there may be some tweaks to the offense with Linehan’s addition to the staff, but also assured much of Brady’s magic will be preserved.

“I think it’ll be a little bit different, actually,” he admitted. “I don’t know what’s fully intended yet, but I know we’ve changed a lot of stuff so far. [Scott Linehan] is a good coach, giving us some new plays, but we always keep some of our old plays.”

Chase has played the majority of his career at LSU in the outside receiver spot, otherwise known in football terms as the “X,” but with Justin Jefferson’s departure to the NFL, many have speculated whether he will get some reps in Jefferson’s slot position, “the F,” in Linehan’s new scheme.

He wouldn’t rule it out, but he says he’s likely to remain on the outside.

“We can’t share [specifics],” Chase said in relation to where he’ll be positioned. “But I will be at X this year. I like X the most because it’s in the boundary. You don’t have that much space. I like it because most of the time you’re in man-to-man and it’s just you and the cornerback.”

Humble and reserved off the field, Chase turns into a different beast when he’s on it. As a matter of fact, he never viewed himself as a dancer before last season, but part of that, he admits, was pulled out of him by Jefferson.

“The dancing came from Justin, I’ll give him all the credit,” Chase confessed before the College Football Awards Show. “Everytime I’m by Justin, he starts dancing. I don’t know why I’ve been dancing a lot. I can’t dance. But I’ll be out there dancing like I can.”

Don’t believe him for a second, he can definitely dance.

Confidence, stemming from both the players and the coaches, was one of the main themes of LSU’s run to the title in 2019, and Chase isn’t someone who lacks it.

Throw it up to him and you’ll likely get mossed. Let him get a first down and he’ll flex on you. LSU’s three-headed monster at receiver in 2019 was unlike anything college football had seen before, so no wonder nobody could stop them.

The Best Receiver in the Country

Ja’Marr Chase is the winner of the 2019 Biletnikoff Award! pic.twitter.com/EYAeJIOB4G

“Like I said at the beginning of the year, every team has to pick their poison,” Chase said after the national championship game. “Tonight, they bracketed Justin [Jefferson], which allowed me and Terrace to go off. It’s just a matter of time.”

“I’m just looking at it the same way,” Chase said on the upcoming season. “I’m going to write a couple of goals down and put them back on my mirror.”