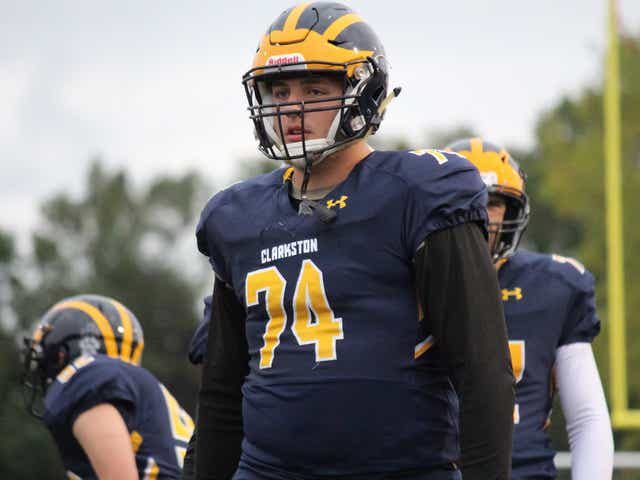 HoldThatTiger: LSU has just landed a commitment from four-star, class of 2021 offensive tackle Garrett Dellinger out of Clarkston, Michigan.

Dellinger, the 6-foot-5, 280-pounder, is rated the No. 3 prospect in the state of Michigan and the No. 11 offensive tackle in the nation, according to the 247Sports Composite rankings. He choose the Tigers over Big Ten powerhouses Ohio State, Michigan and Penn State.

“Tall, but is naturally broad-shouldered and will be able to carry a lot of good weight in college,” said 247Sports recruiting analyst Allen Trieu on Dellinger. “Very good athlete who has also played varsity basketball since his freshman season. Plays tough and gets off the ball with good pad level. Has balance and coordination in space. Good strength given his age, still continuing to make progress in that department will be key for him the next couple of years.”

For LSU, Dellinger marks the first offensive lineman to commit for the 2021 class. With four spots up for grabs on this year’s line, coach James Cregg will need to continue to sign more top offensive lineman going forward.

“I went to the Arkansas game, was there for the weekend,” Dellinger told the Detroit News in an interview. “Coach (James) Cregg is a great coach, he showed it with getting the Joe Moore award for the (nation’s top) offensive line.

“Their facilities were outstanding. Their locker room with, like, sleeping beds, sleeping pods, that’s unbelievable. Their campus, their dorms and the facility being so close together makes things easy.”

For Ja'Marr Chase, the No. 7 represents a new challenge that excites him