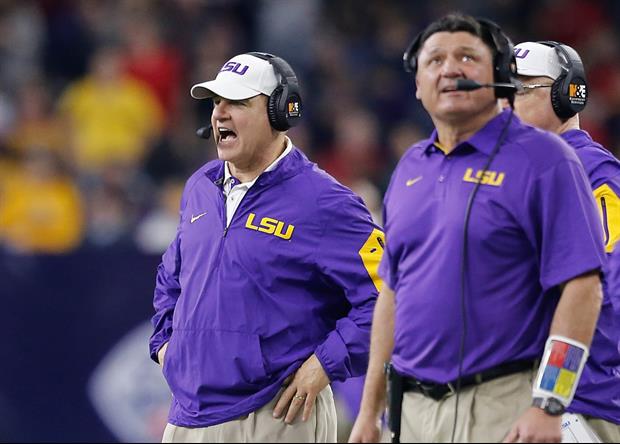 Today is the day every College Football fan lives for, National Signing Day! The newest LSU Tigers were born as they made things “official” by signing and faxing their Letter of Intents. LSU started the day as the No. 1 class in the nation, however, due to a loss of a key commitment and the successes of other schools, the Tigers dropped to No. 3. LSU picked up a huge commitment from 5-Star CB Kristian Fulton to end out the day on a high note.

For more on National Signing Day:

LSU recorded 19 ESPN 300 commitments (tied national record), and signed 9 of the top 10 players in Louisiana. That is called protecting your boarders!

“Any time that you have a recruiting effort that is widespread as this, there’s a lot of people that have done great jobs to produce a class that’s No.1 ranked or No. 3, depending on when you left the room, but it takes effort and energy of many, coaches and their families, the administrators in our building, the administrators in this building, professors that donate afternoons that show the school off, take them to their office, that take interest in our student-athletes.”

“To all of those people that represent LSU very well, I’d like to say thank you.”

“It’s a collective effort, and it takes us all.”

“But I like this class very much. We tied the record for signing ESPN 300 prospects in one class with 19.”

“Signed the top player in the state of Louisiana for the third straight year, Leonard Fournette, Donte Jackson and Rashard Lawrence up north.”

“Enjoyed the fact that we went up north and got some key participants in the class, signed nine of the top 10 in the state of Louisiana, and you know, for those young men that are looking for an opportunity to continue their football career in this state, it tells them they can stay home.”

“We had five mid-year enrollees, wide reciever Dee Anderson will immediately work into some of the buisiness that offensively.”

“Those five guys will start practice with us in the spring and start our coaching sessions and be involved.”

“It’s certainly a class that you can compete for a National Championship with.”