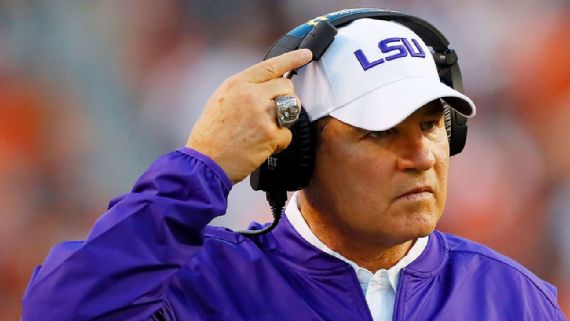 “I thought we had won the game.”

Danny Etling dropped back with 0:1 second on the clock, with what had seemed like the entire season in his hands. Etling and the Tigers’ hiked the ball on the fifteen yard line and found D.J. Chark in the back of the end-zone as the Tigers had pulled off one of the most miraculous wins to date. The Tigers pilled up in the end-zone in complete and utter elation.

With only 0.1 on the clock, it showed that LSU did not get the play off in time, as Auburn won and rolled Toomer’s Corner long into the night. Les Miles and his offense proved they have not gotten much improvement and are still in turmoil. Both teams’ offenses gave the other team opportunities, but neither team could capitalize. Auburn hit six field goals, while LSU only scored one touchdown on a desperation flip to tight end Foster Moreau. Danny Etling was nicked up and drew a targeting penalty and ejection from Auburn defender Tre Williams.

LSU’s defensive effort was impressive yet again, however, the same issues occurred. The Tigers’ offensive time of possession was much too short, keeping the defense on the field for way longer then it should have been, draining the energy of lineman, defensive backs. LSU did have a key goal line stand against Auburn to end the first half, keeping the Auburn lead at 9-7. They did all they could have done, for the amount of time they spent on the field.

Danny Etling played extremely hard, just not great. He said “anybody who wants to be down on us after this, then they’ve got other issues. We played so hard.” Les Miles added he thought this QB played “gutty, tough, football.”

Les Miles said the coaching staff had trouble with their headsets yet again, the same issue they had vs Wisconsin.

Next game: Missouri in Tiger Stadium