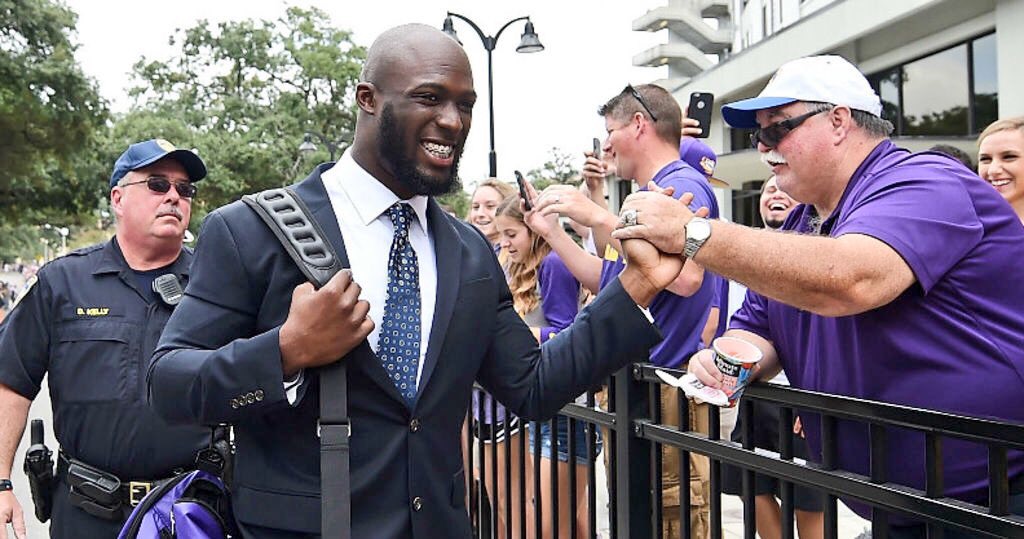 New Orleans, a remarkable city known for its unique culture and entertaining atmosphere, but also for its troubled areas circulated with violence. In the Seventh Ward, there was a ten year old boy with a dream. This boy prides himself on his roots. He wears the city of New Orleans on his sleeve wherever he goes. He’s seen devastation at the highest level. His normal is not your normal. For Leonard Fournette, overcoming hardship and adversity is a skill he has become accustomed to. Despite his challenges, he still manages to be one of the most positive, optimistic, and level-headed human beings on the planet.

Leonard Fournette has witnessed things most teenagers should never see in their lives. Growing up in New Orleans made him tough. He lived in the seventh of nineteen wards, a troubled part of the city at the time. “You have to watch the places you go, it’s really not safe,” Fournette told ESPN. Where he lived wasn’t the most dangerous of the nineteen wards, but there was still a sense of cautiousness. The streets were silent. Through this, Fournette had an escape. At St. Augustine high school, he became a star.

In 2005, his life as he knew it changed forever. One of the deadliest, most malignant natural disasters in the history of the United States devastated the city of New Orleans, and especially Leonard. For him, it was another hurdle he had to overcome, but one even he might not be able to tackle this time. During the disaster, his family slept on a bridge, with many others, for four days and five nights. Ten year old Fournette remembered looking over the bridge, seeing “dead bodies,” and sometimes people shooting at each other. When people got scared, many started jumping off the bridge. It was at this time Leonard said “the whole city came together as a family.”

In the aftermath of Katrina, Fournette used his built up anger and emotional distress out on the football gridiron. Undoubtedly, there are things he would love to forget, but he uses that to motivate him into becoming a better player and more importantly, better person. In his high school years at St. Augustine he racked in 5036 yards, averaged 9.8 a carry, 72 total TD’s and earned himself the No.1 ranked player in ESPN300. Determined as ever before, he just had that look, you could see it in his eyes. Leonard Fournette has always been strong in his life, whether it be physically or mentally, he’s always carried more than just a football.

With expectations mounting, he stayed humble. After narrowing his lengthy one-hundred plus offer list down to just one, Fournette felt great respect and honor to represent his state. “I just wanted to be different,” he said. Staying in Louisiana meant the world to him, it’s where he grew up and were him and his family call home. It’s where his heart is. In ninth grade, Fournette posted an astounding six straight games with 200 or more rushing yards. Cyril Crutchfield, his high school head coach, describes him as “a man amongst boys.” For him it was his rare size and quickness that lured the scouts and the letters to his doorstep.

In his freshman year at LSU, Fournette didn’t wait long to make his mark. The presumable Heisman candidate notched 1034 rushing yards, averaging 5.5 yards per carry. In his sophomore season, he almost doubled every stat line. He recorded 1953 yards and doubled the amount of carries with 300. With numbers on his side, Fournette is still without what he wants most, a national championship. Although coming in sixth place in last years Heisman race disappoints him, he’s hungry to get LSU back to elite football status in 2016.

For Leonard, it all comes back to his roots. As he looks to lead LSU to their fourth national title, he will wear his city on his sleeve. After all, he’s just a boy from the Seventh Ward.