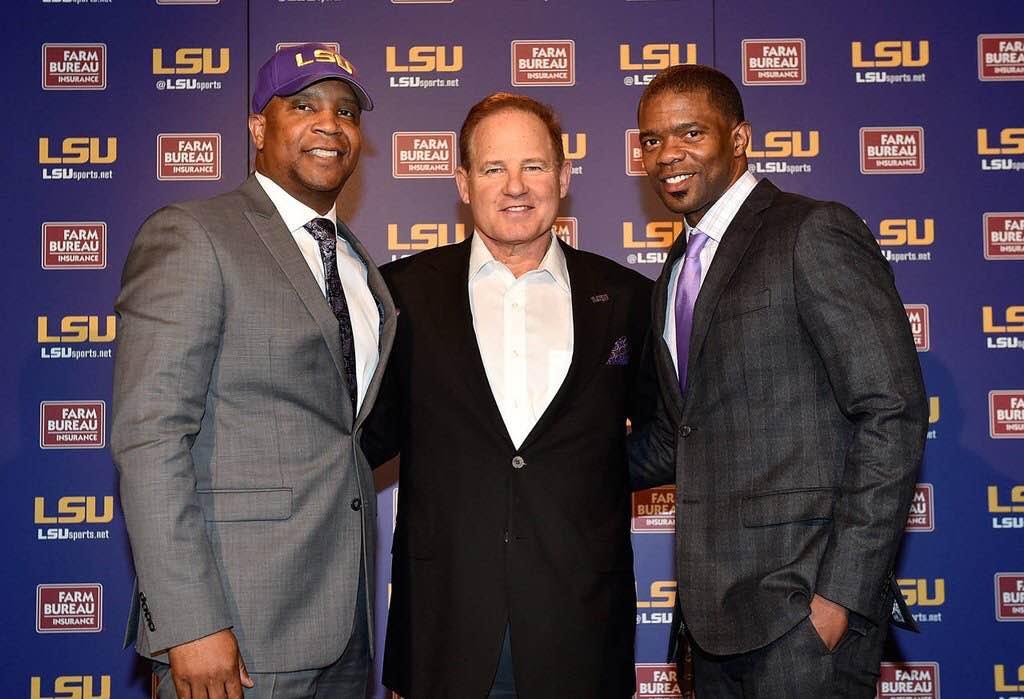 Jabbar Juluke was introduced to the media after accepting the Running Backs coach job. Juluke is replacing Frank Wilson, who left LSU to take the head coaching job at UTSA. Dameyune Craig, however, is also coming in after Tony Ball, 2015 WR coach told the media he is leaving to “pursue other opportunities.” Here’s what the new coaches said:

“Jabbar Juluke is going to coach our running backs.”

“He is based out of New Orleans. He did a great job there at Edna Karr.”

“He is also a part of a National Championship team at Southern in 1993.”

“He spent three years at Louisiana Tech where he coached Kenneth Dixon who has several NCAA records.”

“He has done a great job and was an early draft pick.”

“He brings a wealth of knowledge and interpersonal strength to our program.”

“His relationships with players will be very strong.”

“Just before the the old staff departed and the new staff arrived, he came into my office and said, ‘Listen, I’ll stay if you want to make me full-time.’

“I told him you are going to have to give me some time here to make a decision.”

“Meantime, he went on to the Miami Dolphins. I told him around 15 minutes ago it just takes me a little bit of time to come around to do what I want to do.”

“He’s a quarterback by nature.” He knows every position on the field.”

“He coached under Jimbo Fisher. Jimbo is a great coach and mentor.”

“There he coached several first-round picks. He comes from the SEC. He was a quarterback for Auburn.”

“He comes with great knowledge of how to compete at this level and has great experience.”

“Good afternoon. It is an honor and privilege to be here working for LSU.”

“I am excited for the opportunity to work for a great man with great leadership in the administration here at LSU.”

“I am excited to be here and looking forward to some great times, winning a lot of games and impacting a lot of young men’s lives.”

“One, I want to represent LSU. I wanted you to see it that I am representing this state well. (On wearing LSU hat into press conference)

“Also, when you are bald you want to cover your head up to make sure you don’t get any sun burn or anything of that nature.”

“It’s LSU. That was a very easy choice.” (On the quick turnaround from Texas Tech to LSU)

“Good afternoon. How are you doing?”

“I am honored to be here like Coach Juluke said. It’s a great opportunity for me and my family to get a chance to come back here where I started, basically where my career started as a college football coach.”

“I am just excited about having an opportunity to come back and compete for championships and lear from the best college football coach in the nation.” (High praise for Les Miles from Coach Craig)

“I don’t look at it as a lateral move.” In your carrer, you have personal goals and you have team goals that you set.”

“LSU has a great tradition of developing guys and moving them on to the next level.”