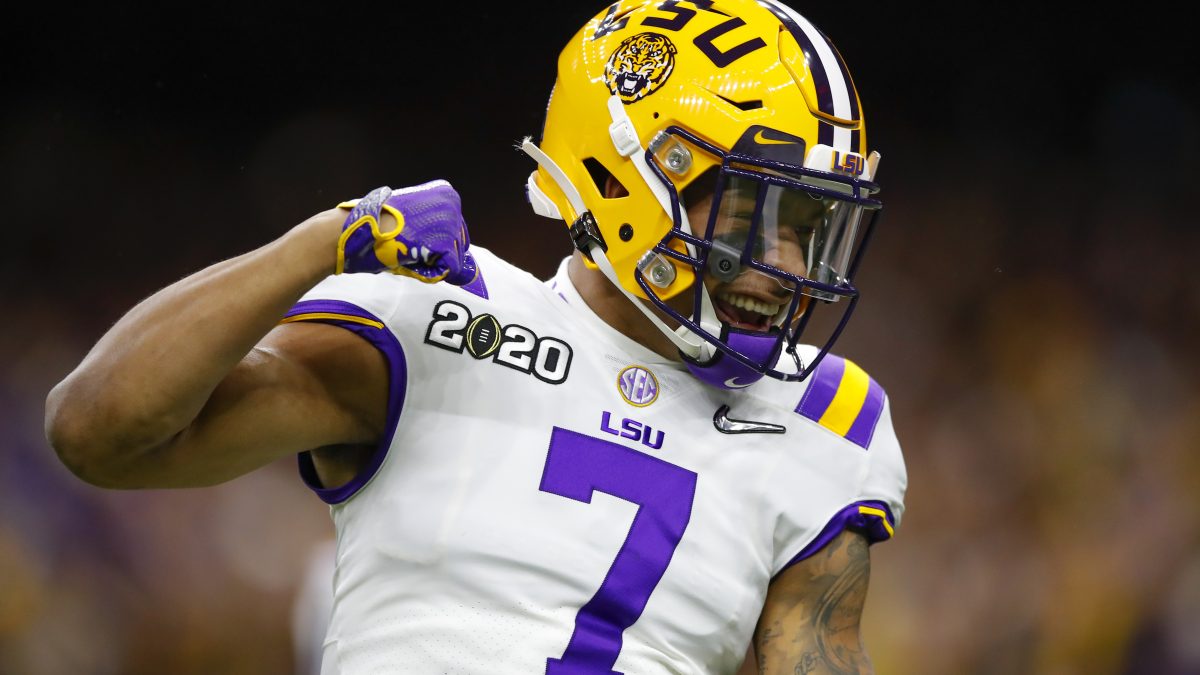 A championship culture is not something that forms overnight, but Ed Orgeron knew he had the chance at something special after last year’s Fiesta Bowl win. Preparations for the 2019 season began the very next day, where the players decided that having character is cool, and winning championships is even cooler.

It was a rare commitment to excellence built by coaches like Joe Brady, who challenged his receivers to catch 10,000 balls by summer’s end.

It was built by program-defining quarterback’s like Joe Burrow, begging his offensive line to go outside in the pouring rain to practice reps with a wet football before a game where rain is expected.

It was built on Saturday and Sunday nights in the indoor facility, where you’d find Derek Singley and his father, Derek Stingley Sr., working to prepare for moments like Jan. 13.

It’s built behind the scenes, when the lights are off, and nobody’s watching.

This can all be said about the 2019 LSU Tigers, but the culture surrounding this year’s championship run exceeds well beyond just that.

In fact, it’s unlike anything we’ve ever seen in college football: the dancing, the smiling, the goofiness, the incredible confidence, that all seemingly switches to deadly focus on Saturdays.

When junior receiver Justin Jefferson was asked after the Peach Bowl what he’d attribute to the historic success the LSU offense was having, he smiled and knew exactly what to say: “Just being our normal selves. Being goofy. Laughing. That’s what we do.”

From touchdown dances to candid media sessions to flashy handshakes, the authenticity of this football team never waivered. They were living their best lives, and kicking a lot of ass doing it.

Part I: The Dancing

Catching 38 touchdown passes between the two, Ja’Marr Chase and Justin Jefferson danced in just about every team’s endzone this season, metaphorically and literally speaking.

A Biletnikoff award winner, and a prohibitive top-20 draft pick, Chase and Jefferson were also the founding fathers of a plethora of trendy dance moves that took the internet, and the college football world, by storm.

It started with The Griddy. A foot-shuffling move that appears easy, but frankly is not. The dance originated from a Landry-Walker high school football player in New Orleans, nicknamed Griddy.

Jefferson debuted the dance in the season opener against Georgia Southern, and then again after scoring the Tigers’ first touchdown of the game vs. Texas early in the second quarter.

After taking a significant hit from a Texas defender in the endzone, Jefferson, or “J Jetts” as members of the team call him, proceeded pop right up, stare at the crowd, and hit The Griddy.

It stuck ever since.

Although Chase and Jefferson get a bulk of the attention, LSU boasted a world-class wideout trio, including sophomore Bossier City native Terrace Marshall, who did miss three games with a foot fracture. All three proved to be unguardable and a force to be reckoned with on the field, but in terms of dancing abilities, Marshall doesn’t compete with his two other teammates.

“That’s just not me,” said Marshall on dancing. “That’s never been me, I never try to dance.”

“He’s lying to y’all,” said Jefferson in the locker room after the SEC Championship. “[Terrace] wants to learn [how to dance], but he doesn’t have the rhythm like us.”

Ja’Marr Chase later joined in on the fun, seizing the opportunity to take another friendly jab at his friend.

“Nah, Terrace wants to dance,” Chase said. “But when we teach him how to dance, he just looks stupid, so we just tell him don’t dance.”

First came The Griddy, then came The Mop.

It was Arkansas week, mid-November, and the morning of ‘Turnover Wednesday’ when a video surfaced on Twitter of five guys dancing, performing what appeared to be a simple sweeping motion to music blaring from a nearby car. Like you might expect, the video started gaining traction, and alas LSU’s next touchdown dance was born.

With fourteen seconds left before halftime against an inferior Razorbacks squad, Burrow found Jefferson over the middle for the score to go ahead 27-6. I think you know what’s coming next.

After crossing the goal line, Jefferson called over Marshall and running back Clyde Edwards-Helaire as all three began to perform — you guessed it — the latest move: The Mop.

But unlike all the other encounters, this one was different. He was flagged.

“I don’t know — the refs just didn’t like us that game,” said Chase at the Monday media availability after the Arkansas game. “We’ll just have to tone it down a little bit.”

Tone it down, they did not. As a matter of fact, the best was yet to come.

‘Get The Gat,’ otherwise known as an early 1990s New Orleans rap song by Lil Elt, became the improbable soundtrack to the Tigers’ championship run. The song resurfaced in early December after LSU student Shawn Taylor created the viral dance, and LSU safety Grant Delpit posted a video to his Twitter account of the team doing it in the locker room after practice.

“It feels good to start a movement,” said Delpit at CFP Media Day. “Last year it was Choppa Style [for the Saints]. This year we brought the Get The Gat back. Shoutout to all the Old Heads. We aren’t trying to take y’alls song. We’re just trying to have fun with it.”

Like any National Championship-winning football team, LSU was invited to the White House for a two-day trip to the nation’s capital. When the team arrived in D.C. on Thursday night, LSU took part in a dinner featuring the Louisiana Delegation, followed by a tour of the city.

On Friday, they broke the internet.

They didn’t genuflect. They didn’t change who they were. They did what they always do: dance.

When Ed Orgeron was hired, many believed LSU “buttoned him up” to look and act more like a traditional head coach instead of a gumbo-loving Cajun who grew up on the bayou in South Lafourche. As time went on, he became his authentic self, and so did his football team.

Many say confidence comes from preparation. When the AP Coach of the Year, the Broyles Award winner, the top defensive coordinator and a professional quarterback wearing a college uniform are all on the same team, nobody was as prepared as LSU in 2019.

There are many different examples of why this year’s LSU team could be viewed as the most confident in history, starting at the top with their Heisman Trophy-winning quarterback.

After defeating Clemson 42-25 in the National Championship, ESPN sideline reporter Maria Taylor conducted her usual postgame interview with Burrow with the confetti falling from the rafters. Taylor pointed out the gesture that Burrow made to his ring finger after throwing a touchdown late in the fourth quarter, proceeding to jokingly ask him if he knows what size he wears.

For Burrow, it wasn’t a joke. It was a question he knew the answer to.

"We already got fitted for 'em." pic.twitter.com/gfTNLXw7lg

“I’ve never prepped for a game of this magnitude and felt a team as confident as LSU coming into this [National Title] game,” said ESPN analyst Kirk Herbstreet after the interview. “You didn’t know if it would blow up in their face, or if it would end up being true. They had a feeling of what was going to come tonight.”

Ever since the Tigers walked away victorious on Nov. 9 in Tuscaloosa, it felt like LSU’s mentality heading into every game going forward was that their biggest opponent was themselves. They knew they were better than the other team, they just had to go out and prove it.

During Florida week, an always contentious and heated build-up, Justin Jefferson told the media “We’re going for their heads” in regard to the Gators.

In recent years, the football team has been often known for blanketed media sessions, and a lot of coachspeak.

Let me say this loud and clear: That was not the case this season.

“We don’t like each other, I’m not even going to sugarcoat it,” said K’Lavon Chaisson during Florida week availability. “That’s something that’ll be exposed on Saturday night.”

LSU was as candid with the media as any team we’ve ever seen. They talked the talk, but unlike most teams that do, they walked the walk as well. They backed up every word.

When Burrow put the game on ice against Texas, he smiled and gave their student section a royal wave goodbye. When he threw his fifth touchdown pass vs. Vanderbilt, he flashed the No. 5 with both his hands over to their sideline. When an Auburn defender took Burrow out with a late hit out of bounds, he marched down the field in three plays for a touchdown.

“I don’t go into games thinking I’m going to talk some trash,” Burrow said before the SEC Championship. “I never initiate it. But if they start it, I’ll finish it.”

The confidence was just different. It started with No. 9, and trickled down to everybody else.

“Their O-Line’s not great,” he said. “Their running backs are not great. But they still make it work. I feel like with the game plan we have, we’re going to dominate them, and I feel very confident in what we’ve got.”

Heading into that game, the coaching staff felt the same way: “uncomfortably confident.”

Some might view the 2019 LSU Tigers as cocky. Some might perceive them as arrogant. But in reality, they’re just confident, because they knew they were the best team in America.

As the postseason exodus appears to wrap up in Baton Rouge, those around the program are starting to realize how important each piece was to the culture of this championship run. You take it for granted when you have it, but when it’s gone, you realize how special it once was.

LSU’s coaching staff, along with the 113 players on the active roster, was simply a perfect fit. It was one big bowl of gumbo with all the right ingredients that culminated in perfection.

From Joe Brady introducing the spread and aligning the offense to fit Burrow’s skill set, to the selfless relationship he had with Steve Ensminger up in the booth. From James Craig and the offensive line, returning most of its starters from a maligned group a year ago, and developing it into the best unit in the country. From Dave Aranda, the premier defensive mind in the game, to Jack Marucci, the top athletic trainer in college football, it all fell into place flawlessly.

Only two teams in the history of the sport can say they finished with a perfect record. One is the Fightin’ Tigers of LSU, and the other is the team they beat in the Superdome two weeks ago.

But the culture of this team is what set them apart.

Yes, they were goofy. And yes, they were overly confident. But there may never be an LSU team as focused as this one. It was the perfect balance of fun and hard work that led to a championship run for the ages.

A run that ended in 15-0. A run that will label them as the best ever. And, to be honest, we probably won’t see anything close to it again.

“They decided having character is cool.”

Character leads to winning. Nothing is cooler than winning. @LSUfootball is proof of that. pic.twitter.com/Q9yfcMnfFb

Edge rusher K’Lavon Chaisson out for the season

LSU moves up to No. 17 in latest AP Poll