Home > Other > LSU cruises past Arkansas to claim Golden Boot 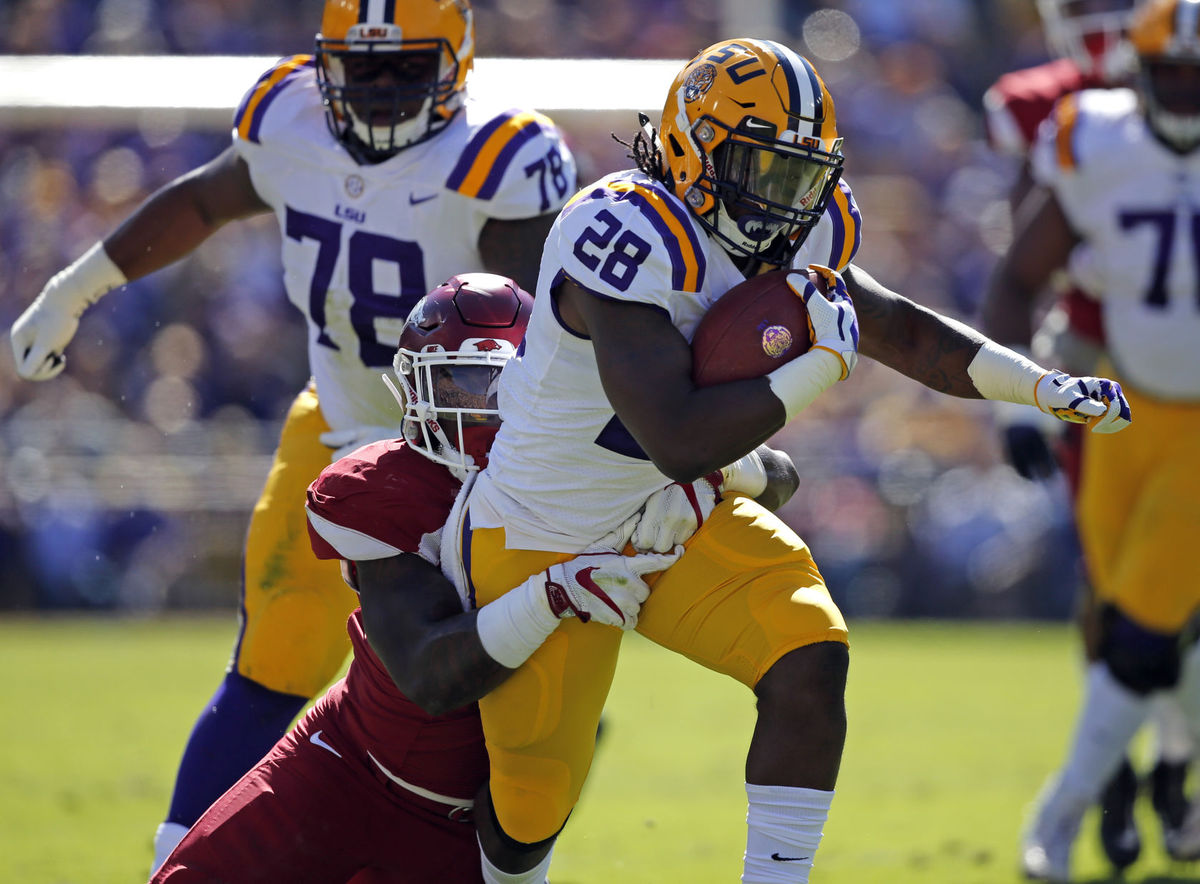 The Golden Boot will remain in Baton Rouge.

LSU’s 33-10 victory over the Hogs on Saturday was a tale of two halves. In the first half, a sluggish Tiger offense discounted a dominant defensive performance and game plan from Dave Aranda. Although LSU was clearly the better team for the first thirty minutes, the score was tied at seven.

“I thought offensively we were sluggish in the first half,” said Orgeron. “There was no hollering and screaming at halftime. We stuck to the game plan.”

LSU would score four touchdowns in the second half. The Tigers’ offense was led by Derrius Guice, who ran for three touchdowns and 147 yards. LSU’s offense was given tremendous field position for most of the game.

All week Ed Orgeron made it clear that the early start time would not be a factor. “With us, we didn’t make that a big deal,” said Orgeron. He told the media that LSU held a team meeting at 7 a.m. before the game Saturday.

LSU’s top receiver D.J. Chark astoundinglycaught his first two touchdown passes of the season, one of which a 68-yard deep ball and the second from a wide open 38-yard throw and score from Etling.

“Last year he thought about (going pro). I’m so glad he stayed,” said Orgeron on Chark.

After a subpar first two quarters, Danny Etling posted one of his better halves of the season, finishing the day 11/16 for 2 touchdowns and 217 yards. Orgeron said that if Etling didn’t perform the way he did in the second half, he would have put in Myles Brennan.

LSU’s field goal kicking was nothing short of a disaster. Connor Culp missed a field goal and two extra points. Culp would later be replaced by Jack Gonsoulin. Orgeron told the media he promises “it will get fixed.”

Although victorious, a reoccurring weakness came back to haunt LSU’s defense: missed tackles. The Tigers’ tackling in the second half is definitely something they will have to address this week. “We still didn’t tackle the way we wanted to in the second half,” said Orgeron.

Next opponent: LSU takes on Tennessee next Saturday at 7 p.m. on ESPN. Today, the Vols and AD John Currie announced that they have fired head coach Butch Jones. LSU will face the interim Brady Hoke on Saturday.

“Great stadium and tradition there. A lot of respect for that school,” said Orgeron on his time at Tennessee.

The Tigers open as a 14-point favorite, per offshore lines. For more information, follow us on Twitter @InsideLSU/@HValentineLSU.