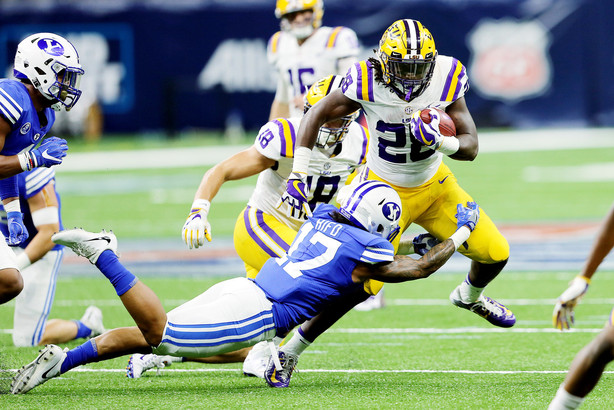 LSU’s defense under Dave Aranda showed no mercy to BYU on Saturday night’s opener in the Superdome. The Cougars offense was held to 97 total yards and didn’t cross the fifty yard line the entire game. BYU’s rushing game was even worse, accountIng for -5 yards on the ground. LSU, although dominant, was without two of their best defenders, Arden Key and Donnie Alexander. LSU is the 5th FBS team in the last 10 years to hold an FBS opponent without a snap across midfield.

LSU QB Danny Etling had arguably his best performance of his career. The fifth year senior went 14-17, for 171 yards. The Tigers heavily depended on Derrius Guice, as the Baton Rouge native ran for 122 yards and 2 touchdowns on 27 carries. With the game already out of hand, Orgeron pounded the ball with Darrel Williams, who ran for 92 yards and a touchdown as well.

New offensive coordinator, new offense. LSU’s offense looked much different with lots of motions, shifts and tricks under Matt Canada. Etling’s 82% completion percentage was the highest by an LSU starting quarterback since Zach Mettenberger in 2013. If Etling maintains that type of production, watch out for the Bayou Bengals.

13 players were absent vs. BYU for reasons that haven’t been announced yet. LSU starting defenders Kevin Toliver, Donnie Alexander and Frank Herron did not travel with the team, however, Dave Aranda still managed to pitch a shutout. Ed Orgeron also fielded 17 true freshman on Saturday, which is tied for the most in the FBS.

LSU (1-0) plays Chattanooga on Saturday in Tiger Stadium. The Mocs’ starting QB will be out due to a four-game suspension in progress.