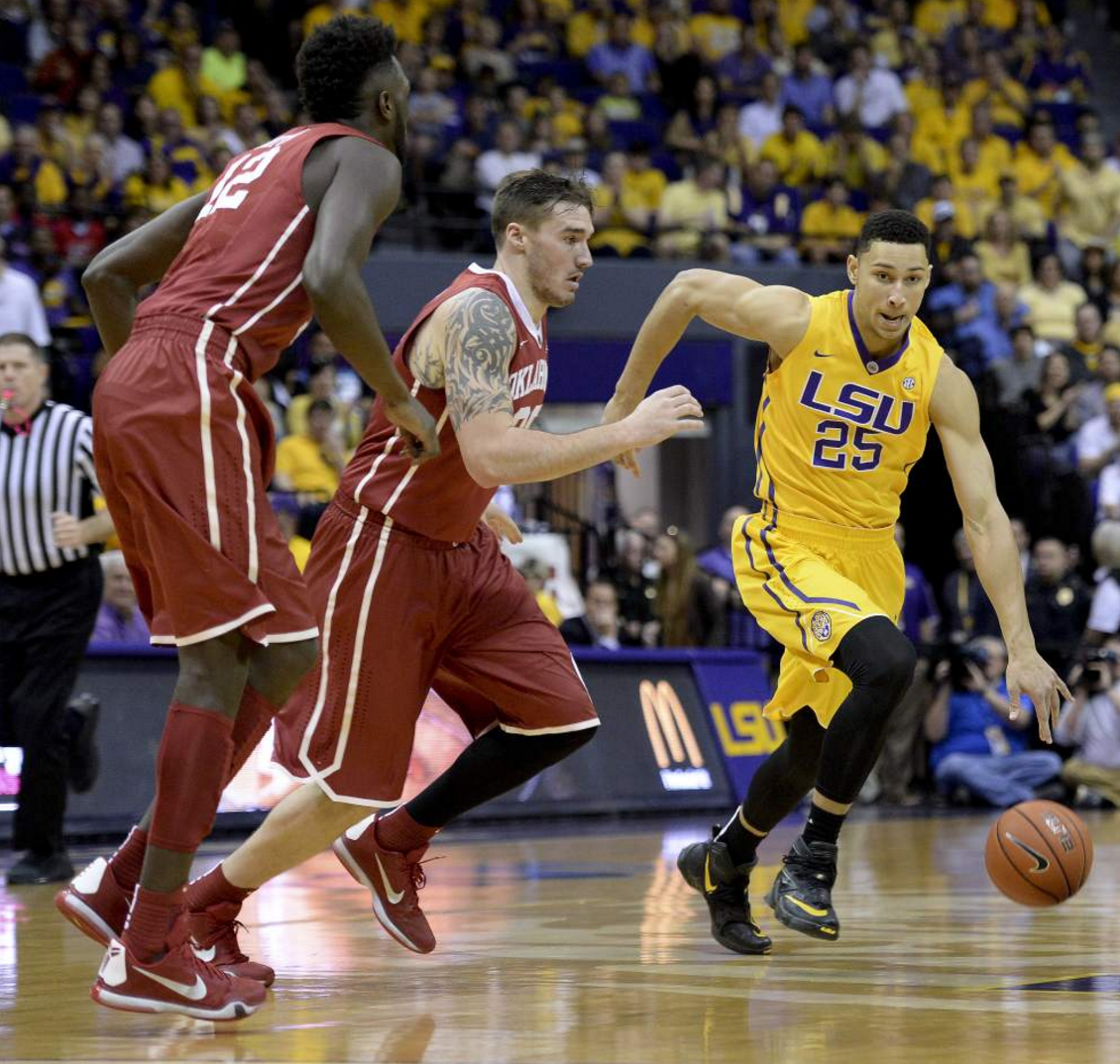 For 35 minutes of the game, LSU had complete control of No. 1 Oklahoma and had totally managed the pace of the game. The Tigers held a somewhat comfortable lead for most of the 1st half and much of the 2nd, but then came the Buddy Hield Show.

Hield scored a game high 32 points for No. 1 Oklahoma. With 3.8 seconds remaining Isaiah Cousins sunk a 15 foot jumper to give the Sooners the 77-75 win, for their 18th victory of the season. For the Tigers, it was complete devastation, for a team that had the lead for most of the game. For a full recap:

Ben Simmons, however, only attempted 7 shots and was silent down the stretch.

“That’s all confidence,” Hield said on his late game heroics.

“My teammates keep lifting me up, even when I start off mising the first two of the second half. They find me in good sports and I was able to knock down good, rhythm shots.”

No. 1 Oklahoma overcame a 14-point deficit to squeak by the Tigers in Baton Rouge.

Isaish Cousins hit a go ahead jumper with 3.8 seconds remaining to lift Oklahoma above LSU (13-8).

Tim Quarterman had his shot blocked at the buzzer to give Oklahoma (18-2) the victory.

“I went to the hole pretty hard and got hit, but they didn’t call the foul,” said Quarterman.

Ben Simmons finished 6-of-7 from the field, but why is LSU’s best player only attempting 7 shots in their biggest game of the season?

Simmons only took one shot in the final 10 minutes, which is completely unacceptable.

“We’ve got to do a better job of getting it to him,” said Johnny Jones.

“We can’t get it in there late to him where they can maybe get deflections. As we continue to play, we’ll continue to get better at it.”

“We knew coming in against the No. 1 team in the country that we would have to play a really tough, hard nosed basketball game and not be perfect but try as close to flawless as possible to give ourselves a chance.”

“Our guys did a great job coming out, playing well in the first half, going in with a little momentum after Aaron Epps’ three and coming out in the second half with the same as well, executing and playing hard.”

“Our guys kept their head up. Tim Quarterman did a great job of getting the ball up the floor and getting it to the rim where we needed it.”

“Unfortunately, we didn’t get the opportunity to get to the free throw line.”

“At the end of the day, I certainly applaud our guys with their effort against a great team.”

“I want to say thanks to our fans that came out and did a tremendous job — the group that stood out and waited through the night and getting in today, the students and the others — to give us and provide the type of energy they did today.”

“Ben (Simmons) did a good job of making plays and getting the ball to the other guys, setting screens, spacing the floor.”

Simmons shouln’t be “getting it to other guys” down the stretch, he needs to take over games, put the team under his wing.

NEXT: LSU travels to Auburn on Tuesday.