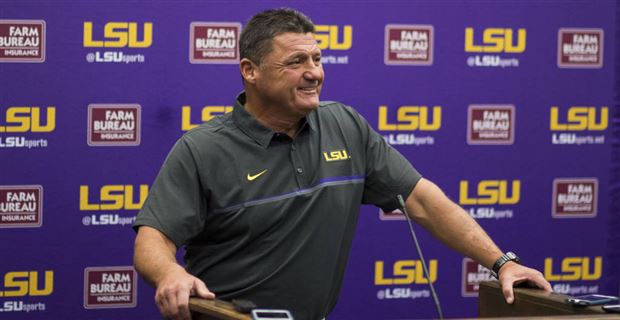 The Fightin’ Tigers held their second of four preseason scrimmages to be played in preparation for their matchup with BYU on Sept. 2nd. Ed Orgeron did address the media shortly after LSU’s afternoon scrimmage today in Tiger Stadium.

“Myles (Brennan) did take a couple of snaps with the first team today,” noted Orgeron.

After making such comments, Coach O was quick to reiterate that Danny Etling was still their No. 1 at quarterback.

As far as the receivers, Orgeron said that D.J. Chark, Russell Gage and Derrick Dillion have “separated themselves” in camp. Orgeron later mentioned that OC Matt Canada will be in the press box this season to call plays.

Grant Delpit took an INT for a TD, too.

To end his presser, Ed Orgeron made a few injury notes. OG Donavaughn Campbell should be back on Monday from a “collision” sustained last week. RB Clyde Edwards-Helaire should also return on Monday from a hit taken in last week’s scrimmage. Finally, Andre Anthony has been “sidelined” with an injury lately. Rahssan Thornton and K’Lavon Chaisson have been rotating with the first team.