Home > Other > LSU offense struggles in 10-0 loss to Alabama 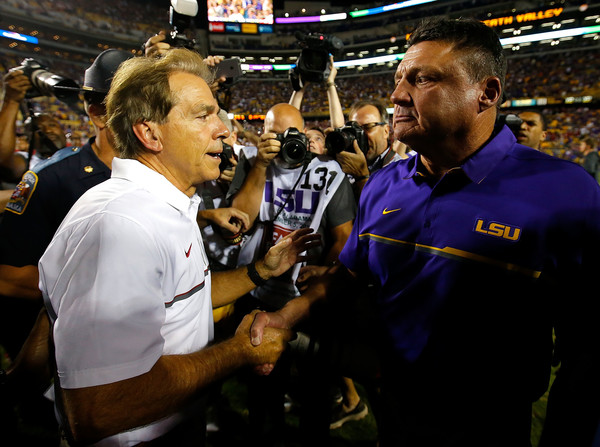 A familiar scene in this, oh so dramatic, rivalry.

As the Tigers took the field on Saturday Night, Tiger Stadium was … rockin’. On the very first possession, with energy sky-high, LSU’s Jamal Adams reached to intercept Alabama QB Jalen Hurts, and there were nothing but roars from 102,000 fans. The overarching story of the night, however, was the Tide defense shutting down Leonard Fournette again, holding him to 35 yards rushing in total. Offensively, Danny Etling missed some throws, but was poorly protected by the offensive line, who was back to full strength after a season riddled with injury. Etling under-threw an open D.J. Chark on a important third quarter drive. The Tide held LSU to 125 yards of offense.

The Tiger defense was the bright spot of the night, playing their best game of the season, holding the Tide to a lone touchdown, and scoreless in the first half for the first time since 2007. Both teams entered the locker room tied at 0.

In the third quarter, there were a few controversial calls/no calls that didn’t go LSU’s way. DE Frank Herron caused a huge fumble that Arden Key jumped on for LSU. Shortly after, a skirmish broke out at the Alabama 45 yard line. The Tide were given three personal foul penalties and the Tigers were given one, but the penalties offset each other, which mathematically, seems impossible. Later in the fourth quarter, many argue that DE Lewis Neal, who was rushing Alabama quarterback Jalen Hurts, was being held on Hurts’ touchdown run.

Overall, the Tigers, with any offense, had a chance in this one. Unfortunately, the struggling offense wasted an incredible performance from the LSU defense, who kept Jalen Hurts and Calvin Ridley in check. Late in the fourth quarter, Hurts’ legs killed the Tigers with a costly touchdown.

Alabama defeated LSU to win their sixth straight game against the Tigers, 10-0. It’s clear that there is no better team in college football than the Crimson Tide, and they will win the national title. LSU will now be determined to fight the “Alabama effect,” and avoid a hangover at Arkansas, which they have done the last two years.