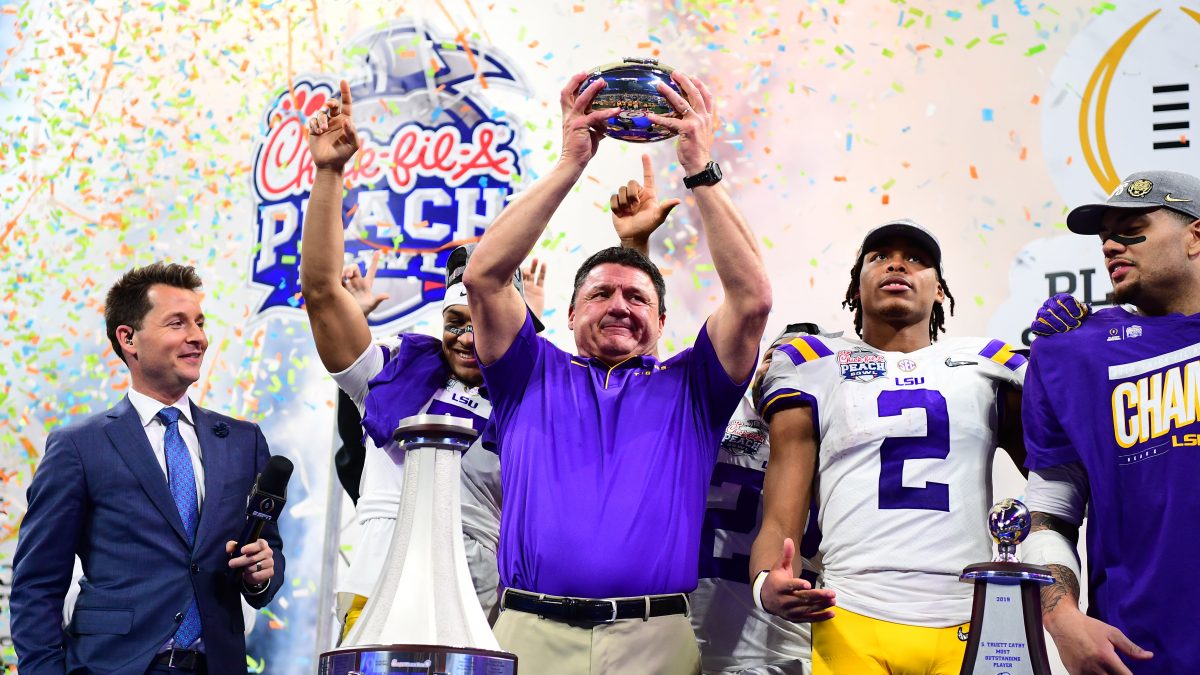 NOLA BOUND! LSU has defeated Oklahoma in historic fashion to capture the Chick-fil-A Peach Bowl and advance to the National Championship game.

This marks the Tigers’ sixth win of the year over an AP top-10 opponent, with a chance at No. 7 on Jan. 13 in New Orleans for the grand prize.

It was just another day at the office for quarterback Joe Burrow, who finished 29-39 passing, for 439 yards and eight total touchdowns. In fact, Burrow had seven touchdowns heading into halftime.

“We go into every game thinking that nobody can stop us,” Burrow said postgame. “That’s the way we think. We think we need to score every time we touch the ball. We’re still chasing that perfect game.”

While Burrow posted another record-setting night, it was wideout Justin Jefferson who stole the show in Atlanta. Jefferson finished with 14 catches for 227 yards and four touchdowns, setting the Peach Bowl, New Year’s Six and CFP record for most receiving touchdowns in a single game.

“When someone is hot, why not keep going to him,” Jefferson said postgame. “Joe just kept finding me. Just making those big plays.”

Terrace Marshall tallied 6 catches for 80 yards and two touchdowns as well, while tight end Thad Moss totaled 4 receptions for 99 yards and a touchdown.

Jefferson boasted a loaded stat sheet, but it was running back Chris Curry who might have had the most surprising performance. Usually LSU’s fourth-string back, Curry got the start in place of Clyde Edwards-Helaire and provided the Tigers meaningful reps, rushing for 89 yards on 16 carries.

Edwards-Helaire (hamstring) contributed in a limited role tonight, and told reporters postgame that he should definitely be 100-percent in two weeks for the national championship.

As the Tigers head to the CFP Title Game, Saturday was a night filled with emotion from start-to-finish.

Before the game, the tragic news broke that Steve Ensminger’s daughter-in-law, Carley McCord, was one of the five people killed in a small plane crash in Lafayette, Louisiana this morning. Ensminger fought back tears at midfield during warmups, then proceeded to craft a masterful game plan in tonight’s dominating win.

“He was talking to Coach O and the first thing he said to him was, ‘We’re going to get through this,’ said Thad Moss of Ensminger. “He went out there and called a hell of a game.”

Ed Orgeron fittingly awarded Steve Ensminger the game ball postgame, the only game ball that the team has given out this year. Words cannot truly describe what Ensminger did tonight. He did the impossible.

Next, LSU will face the No. 3-seed Clemson in 16 days for the National Championship at the Mercedes-Benz Superdome. One game stands in the way of a fairytale-type season and ending for the (LSU) Tigers.

Note: This post is to be updated throughout the night.

The LSU Standard of Performance