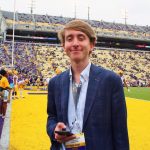 Harrison Valentine is an award-winning writer with expertise in sports communications, public relations and reporting. Experience includes work with LSU’s Athletic Department, The Reveille, SI.com and the founding of an independent blog, InsideTheTigers.com.

Along with publishing feature stories and news articles for the site, Valentine also periodically hosts an LSU podcast on iTunes and Spotify, while managing and frequently updating all InsideTheTigers social media accounts.

The site was created in Valentine’s high school dorm room at Blair Academy, when he was inspired to create his own content. Since then, InsideTheTigers.com has published over 1,000 articles, garnering national attention from readers and followers across the globe.

In 2019, Valentine was able to attend and cover events like the Heisman Trophy ceremony in New York, LSU home football games, the SEC Championship and National Championship.

His work is featured on LSUsports.net. Currently working as a student digital reporter/podcast co-host for the LSU athletic department, Valentine focuses on player profiles and feature pieces, published on LSUsports.net, LSU football game programs and on the school’s various social media accounts.

He also co-hosts Boot Up: The LSU Basketball Podcast with Cody Worsham, which you can find on all platforms.

In June of 2021, Valentine won three first place awards from the Louisiana Sports Writers Association in their annual contest.

Unlike his work for LSUsports.net, Valentine’s articles for LSU’s student newspaper were typically shorter, news-oriented and less comprehensive.

Coverage included football and men’s basketball for The Reveille, and notable stories included his feature on Mahmoud Abdul-Rauf, the LSU-Kentucky basketball gamer and recruiting pieces.

From February to August 2020, Valentine was also a contributor for LSU’s Sports Illustrated channel.

Before the pandemic hit, his main role was to produce feature stories and game recaps on LSU football, basketball and baseball. But with sports taking an immediate hit in March, he wrote 60+ stories over the summer on a wide-range of topics including the NFL Draft, position breakdowns and columns.

When Valentine isn’t writing, he’s probably getting frustrated at the Mets or playing golf. He prefers the latter.

A candidate for the class of 2022, Valentine is currently a senior in LSU’s Manship School of Mass Communication.