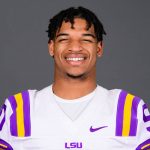 SOPHOMORE SEASON (2019)
The most decorated wide receiver in school history and the winner of the 2019 Biletnikoff Award as the top receiver in college football … Joined Josh Reed (2001) as LSU’s Biletnikoff Award winners … Unanimous All-American after a record-setting sophomore season … The first wide receiver and 11th player overall in LSU history to become a unanimous All-American … A unanimous first-team All-SEC selection by the AP … Set SEC record for touchdown receptions in a season with 20, breaking the mark with a pair of TD receptions against Clemson in the CFP National Championship Game … Also broke SEC single-season mark for receiving yards against Clemson, establishing the record of 1,780 (broke Reed’s 2001 record of 1,740) … Had nine catches for 221 yards and a pair of TDs in win over Clemson in title game … First receiver in LSU history with three 200-yard games in a season and the only player in school history to have two 200-yard games during the regular season … Started 14 games and finished with 84 receptions for 1,780 yards and 20 TDs … Led nation in receiving TDs (20) and yards (1,780) and finished No. 2 nationally in yards per game (127.1) … Joined quarterback Joe Burrow, running back Clyde Edwards-Helaire and wide receiver Justin Jefferson to make LSU the first team in SEC history with a 5,000-yard passer, a 1,000-yard rusher and two 1,000 yard receivers in the same season … Originally set the school record for receiving touchdowns in a season at Ole Miss, breaking Dwayne Bowe’s record of 12 set in 2006 … Surpassed 1,000 yards in a season at Ole Miss, the eighth 1,000 yard receiving season in school history … Owns nine, 100-yard receiving games this season for the second most in school history … Caught two passes for 61 yards against Oklahoma … Had three catches for 41 yards and a TD against Georgia in SEC title game … Tied the SEC record for touchdowns on a 23-yard pass from Burrow to give LSU a 7-0 lead in the SEC Championship … The leading receiver against Texas A&M with 197 yards, seven receptions and two touchdowns … Caught six passes for 144 yards and two TDs against Arkansas … Recorded his second 200-yard receiving yard game at Ole Miss with eight receptions and three touchdowns for 227 yards … Named the SEC Offensive Player of the Week after his performance at Ole Miss … Totaled six receptions on 140 yards and a touchdown at Alabama … LSU’s leading receiver against No. 9 Auburn with 123 yards on eight receptions … Finished with 48 yards and one TD on five receptions at Mississippi State … Led the Tigers with 127 yards on seven receptions and two touchdowns against Florida … Sealed the top-10 win over the Gators with a 54-yard touchdown with 5:43 remaining in the game … Totaled three receptions on 54 yards with one touchdown against Utah State … Set career highs against Vanderbilt with 10 receptions for 229 yards and four touchdowns … Became the third player in school history with four or more touchdowns in a game and the first since 1989 (Tony Moss vs. Ohio) … His 229 receiving yards against Vanderbilt marked the fourth-highest total … The first LSU receiver with 200-plus yards since Odell Beckham Jr. against Furman in 2013 … Totaled 147 yards on six receptions against Texas … Against Texas was part of the first trio in school history, along with Jefferson (163 yards) and Marshall (123 yards), to finish with 100 receiving yards in a game.

FRESHMAN SEASON (2018)
Played in all 13 games, starting seven times, including final five games of the season … Finished tied for second on the team in receptions (23) and was third on the squad in receiving yards (313) … Caught three TD passes and averaged 13.6 yards a catch … Caught at least one pass in 10 games and caught two or more passes seven times … Had his best game as a Tiger in Fiesta Bowl win over Central Florida with six receptions for 93 yards and a TD … The six catches and 93 yards were both career-highs … In the Fiesta Bowl, hauled in a 32-yard TD pass from Joe Burrow to open the third quarter that extended LSU’s lead to 31-21 … All six of his receptions against UCF in the Fiesta Bowl went for first downs … Caught 12 passes for 188 yards and one TD over the final four games of the season … Scored first career TD on a 9-yard reception from Burrow against Southeastern Louisiana in week 2 … Had a 21-yard TD reception from Burrow in win over Ole Miss … Caught what was then a career-best three passes for 31 yards against Texas A&M … Longest reception went for 45 yards against Rice.

HIGH SCHOOL
One of the top-rated players in Louisiana for the Class of 2018 … Listed as a four-star prospect from both ESPN and Rivals.com … Ranked as the nation’s No. 19 wide receiver prospect by 247Sports … Ranked No. 269 nationally in the ESPN 300 … Named first-team 5A All-State as a senior … Earned District 9-5A Offensive MVP honors in 2016 and was named twice to The New Orleans Advocate All-Metro Team … For career, caught 115 passes for 2,152 yards and 30 touchdowns … As a senior, hauled in 61 passes for 1,011 yards and 15 TDs for state quarterfinalist team … Participated in the Under Armour All-American game in Orlando … Won 5A state title in the long jump as a junior … Coached by Jay Roth.