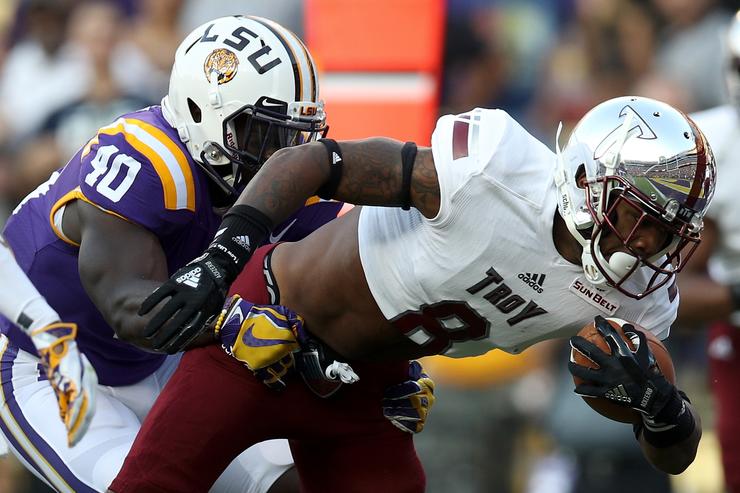 That word has been thrown around the locker room after the past three games. Although the players seem to realize this type of production is “inexcusable,” the same struggles arise on each and every game day with no correction. The lack of effort each week has driven this talented team into a dark state of mediocrity, and maybe even worse, irrelevance.

Even with our new and “improved,” if you can even say that, offensive coordinator, Matt Canada has accomplished virtually nothing in his short tenure, and in fact, has made the offense look even worse. (Go figure) The team as a whole looks nothing but confused, every second of every minute that goes by on the field. Long story short, Canada seems to have no command of this offense, or his players. The Tigers didn’t convert one third down the entire night. The slow starts may not be a slump anymore, perhaps, an accurate representation of where they are as an offensive unit.

The coaching staff seems to have absolutely no grip on the quarterback situation. Etling and Brennan have rotated back and fourth, creating an incredible lack of confidence within each of them. If one of them makes a mistake, Orgeron immediately signals the other guy, yanking them at the exact wrong times, halting any momentum. Fans better hope for the life of them that they don’t waste Myles Brennan’s talent in his four years here.

Oh, and Arden Key, can you make it a little less obvious you’re playing for the NFL and not for LSU? For someone who dominated every snap in 2016, Key has made zero impact thus far. Absolutely zero. Key might as well just sit out this year if he’s going to show no effort for this team.

Derrius Guice is turning into the Leonard Fournette of last year. A once Heisman favorite has now evolved into a player who is sitting out a handful of games for an injury that no body really knows about. If Guice plays last night, LSU’s offense probably isn’t dominated by a sorry Troy defense. Guice was fully dressed, but never entered the game. Darrel Williams played modestly and Nick Brossette fumbled on the very first possession.

The offensive line is that of a high school team, and that might not even be a joke. The loss of Maea Teuhema was as monumental as anything. The unit consists of a bunch of freshman who look like they’ve never seen a football field in their lives. Syracuse and now Troy, two schools who probably have never had a top-ten recruiting class in their programs history, completely dominated LSU’s offensive line the past two weeks.

The defensive line just lacks quality depth. The opposing offenses, who aren’t usually good, have flown through them like water, and Dave Aranda has had no answer for it. Alabama has outscored their last two opponents 125-3, and it seems likely they post 70 on the Tigers’ defense Nov. 4th.

Here’s the actual point that’s trying to be made here: Ed Orgeron will never lead LSU to where they want to be. Hiring the defensive-line coach because he has a cajun accent will prove to send LSU into irrelevance in the coming years. Have you seen his record at Ole Miss? Orgeron went 10-25 in his stunt in Oxford and somehow he’s now going to lead us to the College Football Playoff? And, in case you forgot, his buyout is $12M.

Now that this season is a wash, LSU will fight (for the life of them) to win three SEC games and make a bowl. Do you really see that happening? The Tigers lost to Troy at home and now we’re being asked to win three SEC games? Tennessee thought they held the worst performance on Saturday, but LSU said “hold my beer.” That honor now belongs to the Fightin’ Tigers.

If anyone cares, LSU takes on Florida in Gainesville next Saturday on CBS. As usual, follow us on Twitter @InsideLSU and @HValentineLSU for more.