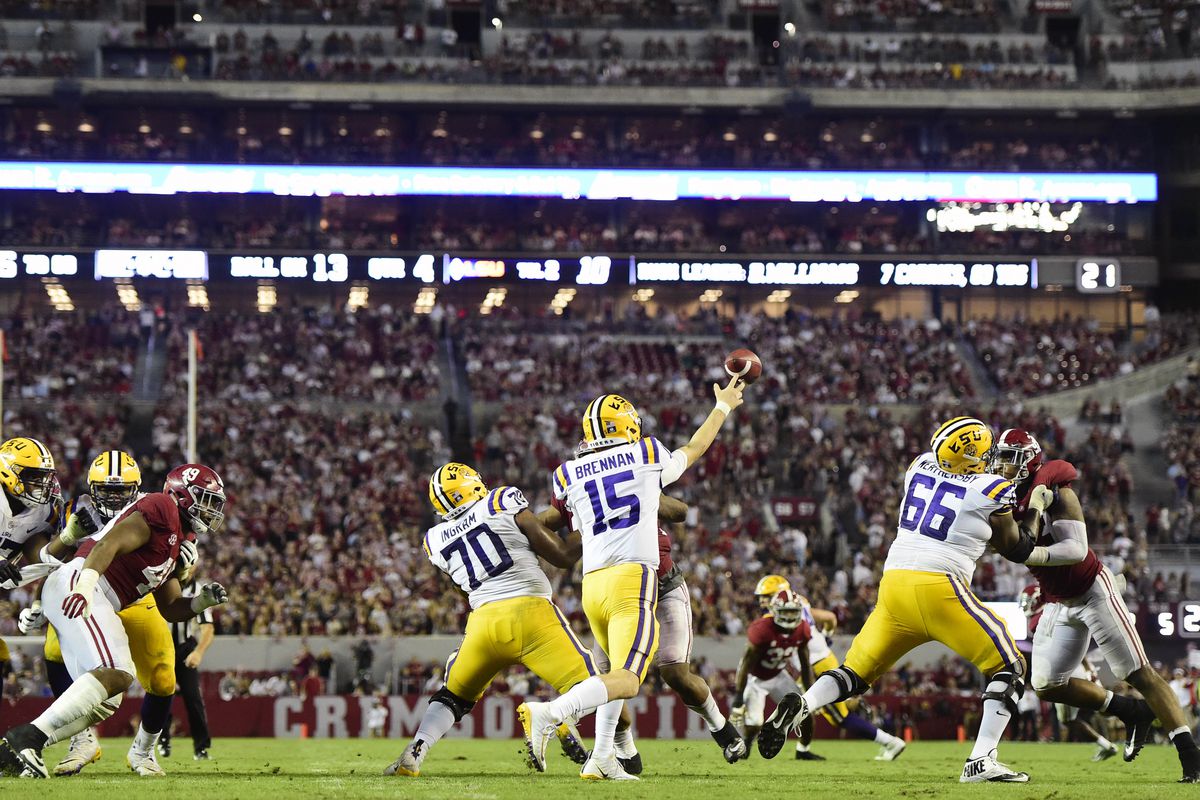 BATON ROUGE ? Ed Orgeron and the Tigers returned to the practice field on Sunday, gearing up for what should be one of the most important and intriguing football seasons of the last 10 years. It’s year two of Ed Orgeron’s campaign as full-time head coach and many questions are to be answered ? beginning at quarterback. Orgeron understands the expectations mounting and believes he’s found his guy at that position.

Whether you like it or not … it’s a very sensitive topic. LSU’s struggles to find a “franchise” quarterback has cost them a boatload of wins, recruiting battles, and frankly ? plan ol’ championships.

It started with Russell and ended last year with Etling. Believe it or not, Danny Etling was one of LSU’s most efficient quarterbacks of the past decade or two. In fact, during his two-year stint in Baton Rouge, Etling ranked No. 2 in SEC history in interception to attempt ratio. He threw just 7 interceptions on 511 attempts. More importantly, he completed 60% of his passes for 4,357 yards and 25 touchdowns and led LSU to a 16-6 record over the last two seasons.

But, that still just wasn’t enough. LSU has been in desperate need of a quarterback who can take over a game in the middle of November and win it. In 2016, the Tigers were on the wrong side of that notion when freshman QB Jalen Hurts single-handedly lifted the Tide to victory in Death Valley with a 21-yard touchdown run.

In 2018; however, Orgeron is confident he has that guy who can change the culture at quarterback. “I believe we’re finally going to have a quarterback that LSU’s been looking for for a very long time,” said Orgeron on a radio interview last Thursday. The Tigers opened up practice on Sunday morning and finally got a first glimpse into that guy who now has a clear view ahead at that starting job.

That guy is sophomore Myles Brennan. Orgeron told the media on Sunday that this will be a race that extends well into fall camp, but there hasn’t been as much excitement around a quarterback like Brennan in a very long time. Brennan, who was once going to be redshirted, was thrown into live action last fall and gained some quality experience, both home and on the road. The then freshman QB threw for 182 yards and a touchdown in the few reps he saw last season. With a phenomenal arm and pinpoint accuracy, it’s obvious, though, that Brennan will need to bulk up and gain weight this offseason if he wants to compete at the SEC level on a weekly basis.

Brennan saw first team reps on Sunday and will be the favorite heading into fall camp. Even though Brennan has created a well-deserved excitement around LSU’s future at QB, the battle won’t be a walk in the park. In fact, there’s another guy, if Brennan wasn’t around, who would probably create as much excitement himself. His name is Lowell Narcisse, a red-shirt freshman from St. James, Louisiana. Narcisse is a dual-threat quarterback who has impressed Orgeron and the coaches throughout last season and into 2018. “All three of those [QB’s] did some really good things. Lowell Narcisse looked the best he’s been,” said Orgeron on Sunday after LSU’s first practice of the spring. And as a matter of fact, many people believe Narcisse will be the guy starting for the Tigers on Sept. 2 in Dallas.

The third quarterback in the race is Justin McMillan from Cedar Hills, Texas. McMillan is someone who has stuck around, despite the craziness of LSU’s quarterback position. He’s a junior with a strong arm who thinks this will finally be his year to earn the starting role. McMillan is a pro-style left-handed QB who Coach O thinks is improving mightily and has a legitimate shot to win the job as well.

“I liked what I saw today out of Justin,” said Orgeron on Sunday.

Now comes the difficult, hitting that nerve, kind of subject. You’ve got three talented quarterbacks on your roster ? develop them.

Over the past decade, LSU’s problem hasn’t been recruiting quarterbacks, it’s been developing them to perform at their true potential. Honestly … former LSU QB Brandon Harris entered campus ranked 37th overall on the ESPN300 and 2nd overall at his position in the state of Louisiana. Harris, as most fans remember, did not develop into the talent he was supposed to be. Harris would then transfer to the University of North Carolina. At the time, Cam Cameron fielded heavy criticism for his lack of progression with Harris and various other quarterbacks under his tenure. Then came last season under Matt Canada, which was a slight improvement, but not the monumental difference that fans were hoping for.

Now comes the waiting game. With three talented quarterbacks, one slightly more hyped than the others, we must simply wait and see where the chips fall. With Texas Tech transfer WR Jonathan Giles entering the picture, Drake Davis and Stephen Sullivan returning from last year and the two top wide receiver prospects in the nation coming in with Terrace Marshall and Ja’Marr Chase, whoever wins the starting job is going to have some guys to throw the ball to. LSU will also return an experienced offensive line, highlighted by Garrett Brumfield, Saahdiq Charles and top OT prospect Badara Traore. The tools will be in place for LSU’s new hitman to flourish under center.

“We’ve got three great quarterbacks. We’ve got some great receivers. I feel like we can be the best in the country in the passing game,” said transfer WR Jonathan Giles after Tuesday’s practice.

It’s very possible that Orgeron will be forced to have both Brennan and Narcisse share time next season in a two-quarterback system until there is a clear starter. The Tigers will complete 15 practices leading up to the annual spring game on April 21st. None of the quarterbacks will get hit in spring practice, according to Orgeron.

The Tigers will now begin the “Ensminger Era” in Baton Rouge after last year’s short stint with Matt Canada. While Ensminger was LSU’s interim offensive coordinator in 2016, his offense averaged 426 yards and 32 points per game and went 89% in the red zone.

Many think Orgeron is taking a big risk with the hiring of Steve Ensminger, but we should know one thing for certain: Ensminger will be 110% committed to LSU. Back in January, he called this a job that he’s “worked his entire career looking forward to” and now he will work tirelessly until the offense thrives once again.